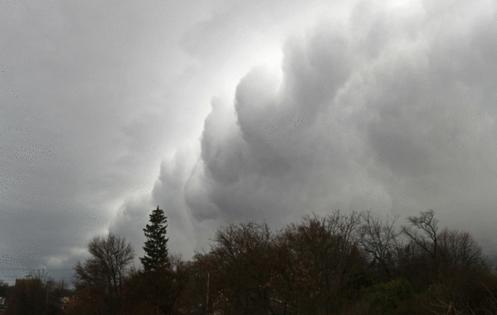 No one was injured as a direct result of those tornadoes, all of which were considered “weak” when using the Enhanced Fujita scale, the universal method for evaluating a tornado’s strength. In addition, there were multiple reports of wind damage in the Rockford area, but experts attribute that to “straight line winds” and not a tornado.

The first tornado occurred beginning at 4:44 p.m. in DuPage County. Known as the Oak Brook tornado, the EF-0 tornado had maximum sustained winds of 75 mph as it snaked a 1.9-mile path beginning southwest of Oak Brook, moving to the northeast, according to the weather service. The tornado had a maximum width of 60 yards and it touched down near the Hilton Hotel and Willow Crest Golf Club and ended in Central Park in Oak Brook, forecasters said. “Damage along the path was characterized by snapped tree branches and a few uprooted trees, as well as partial roof loss to an outbuilding. The tornado was on the ground for approximately three minutes,” according to a weather service summary.

The second tornado occurred about an hour later, at 5:54 p.m. in Boone County and it is known as the Timberlane tornado, also an EF-0, meteorologists said. It was on the ground for approximately one minute and had maximum sustained winds of 80 mph, experts said. It touched down near the intersection of Briar Cliff Street “and lifted over Candlewick Lake,” according to the weather service. “Several softwood trees were uprooted and snapped at the start of the tornado path and laid in a convergent pattern. In addition, several floating docks were thrown across Candlewick Lake.”

The third tornado also occurred in Boone County, near the small town of Capron, nearly 80 miles northwest of Chicago. It was given a rating of EF-U, for “unknown.” The weather service explained the rating by saying: “When a tornado is known to have occurred but does not cause damage to any qualified damage indicators, or if the only damage is located in an area that is inaccessible to NWS storm survey personnel, then a tornado may be assigned the EF-Unknown (EF-U) rating.” The Capron tornado was verified “based on two photos shared to the National Weather Service from the public,” meteorologists said. The “brief tornado” touched down “in an open field near the intersection of Coon Trail and Capron roads just south of the Wisconsin state line. There is no known damage caused by the tornado.”

The straight line winds reported in Rockford seem to have caused more damage than the tornadoes, according to preliminary information from the weather service. The assessment was “based on a review of drone footage provided by the Rockford Fire Department and radar data from both the Chicago and Milwaukee NWS radars,” officials said.

“It was determined that a narrow swath of straight line winds of 70 to 80 mph occurred near the intersection of 9th and Broadway streets southeast of downtown Rockford. These winds caused the loss of a metal roof to a building south of Broadway Street, which resulted in the collapse of the west- and south-facing walls,” according to the weather service.

Additionally, roofing material from that building was blown off the building and “several power poles and trees were snapped along 9th Street along with additional roof damage in the vicinity. The damage orientation was consistent with a divergent area of southerly straight line winds,” the weather service said.