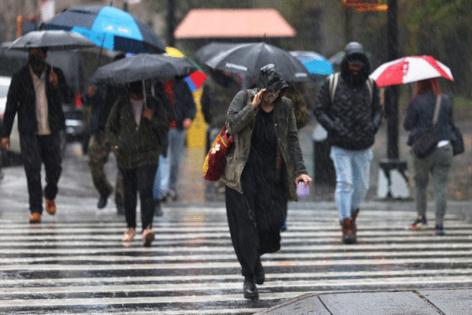 The nor’easter that soaked New York battered New England with hurricane-force gusts Wednesday, upending trees and leaving more than half a million homes and businesses without power. Wind gusts of 87 miles per hour ripped through Scituate, Massachusetts, near Boston. They reached 94 mph on Martha’s Vineyard, according to the National Weather Service.

The storm flooded roads, closed schools on Cape Cod and mangled the wings of several private airplanes at airports around the region. Roughly 590,000 homes and businesses were without electricity, primarily in Massachusetts, according to PowerOutage.us. The storm’s central pressure, a measure of its strength, dropped so quickly that the National Weather Service designated it a “bomb cyclone.”

“It was a pretty high-impact event,” said Bob Oravec, a senior branch forecaster at the U.S. Weather Prediction Center.

The storm, which dumped 3.3 inches of rain in New York’s Central Park Tuesday, comes days before the 30th anniversary of the Perfect Storm, when a nor’easter merged with a hurricane to form a tempest made famous by a Sebastian Junger book and a 2000 film starring George Clooney.

At Boston’s Logan International Airport, 73 flights have been canceled, according to FlightAware, an airline tracking service. The Massachusetts Bay Transportation Authority tweeted photos of commuter trains damaged by limbs and debris. One train had a smashed windshield.

The storm, less than 100 miles southeast of Cape Cod Wednesday afternoon, has a 10% chance of turning into subtroprical storm Wanda in the next two days, according to the U.S. National Hurricane Center. It will drift northeast, threatening Nova Scotia through Thursday, according to Environment Canada.

But the worst is over for the Northeast U.S.

“The winds will be dying down,” Oravec said.