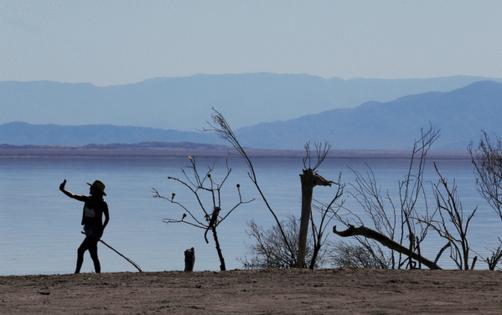 LOS ANGELES — The Biden administration has announced a plan to provide $250 million to accelerate environmental projects around the shrinking Salton Sea, helping to revitalize its ecosystems and control hazardous dust in a deal that will clear the way for California to take less water from the drought-ravaged Colorado River.

Leaders of the Imperial Irrigation District, which uses the single largest share of the Colorado River to supply farms in the Imperial Valley, had called for federal money to support the state’s Salton Sea program as a key condition for participating in water cutbacks. The district’s leaders praised the funding commitment from the Interior Department and the Bureau of Reclamation, calling it a historic step toward addressing the windblown dust and deteriorating habitats that have plagued the lake.

“This checks the box big time,” said J.B. Hamby, an Imperial Irrigation District board member. “It’s a really big deal, and nothing like this has really ever happened before.”

Earlier this year, federal officials demanded large-scale water cutbacks throughout the Southwest to try to prevent the Colorado River’s reservoirs from dropping to dangerously-low levels. Four major California water districts have proposed to reduce water use by up to 400,000 acre-feet per year for the next four years, about 9% of the state’s total water allotment.

The Imperial Irrigation District has pledged to take on the largest share of California’s reductions, up to 250,000 acre-feet of water per year.

“From the outset, IID made it clear that taking action to protect the Colorado River system would have significant impacts on the Salton Sea, and that IID’s participation was conditioned on real efforts and dollars to protect public health and wildlife around the sea,” Hamby said.

He said the federal government’s new commitment “makes it much easier and simpler for us to make large contributions toward the Colorado River system.”

The Interior Department said the agreement will expedite implementation of the state’s Salton Sea Management Program, which includes creating shoreline habitat areas for birds and controlling dust along the retreating shorelines.

Deputy Interior Secretary Tommy Beaudreau said the agreement “represents a key step in our collective efforts to address the challenges the Colorado River Basin is facing due to worsening drought and climate change impacts.” He said the funds from the recently passed Inflation Reduction Act “will help to support the Imperial and Coachella Valley and the environment around the Salton Sea, as well as support California’s efforts to voluntarily save 400,000 acre-feet a year to protect critical elevations at Lake Mead.”

The next time someone moans that Congress needs term limits, remember Bristol Bay. Sometimes it takes a long time to accomplish important goals in Washington, D.C.