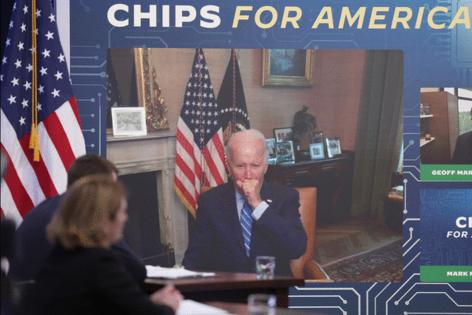 The CHIPS and Science Act, which President Joe Biden is poised to sign into law next week, was pitched as a once-in-a-lifetime chance to revitalize the U.S. semiconductor industry and counter Asia’s manufacturing power.

What went less discussed was the legislation’s environmental impact. The bill is poised to pump $52 billion into an industry that devours energy and produces toxic waste — at a time when a global surge in chip demand is already turning companies into bigger polluters.

With both the U.S. and Europe racing to rebuild their chipmaking infrastructure, environmental concerns are taking a back seat, said Pauline Weil, a researcher at Brussels-based economic think tank Bruegel.

“Countries are really not thinking about this,” she said. “It’s offering on a plate billions of subsidies with very little strings attached, and the strings are not attached to the environment.”

The European Union is proposing some $43 billion for its own chips legislation, subsidizing a building boom by the world’s largest chipmakers. New projects from Intel Corp., Samsung Electronics Co. and Taiwan Semiconductor Manufacturing Co. are poised to sprout up in Germany, Ohio and Arizona.

An examination of the companies’ corporate responsibility reports shows that their power and water use is already on the rise. That’s not surprising in a growing industry, but chipmakers like Intel have vowed to slash their emissions and water consumption. Keeping hazardous waste out of landfills is another challenge. The rush to add new manufacturing will only make that harder.

Some projections indicate the industry will double in size over the next decade, meaning efforts to mitigate that footprint need to accelerate. Absent pressure from governments, it will largely depend on the chipmakers themselves how much of that expansion translates into environmental damage.

Making semiconductors is a messy, expensive business that’s getting more difficult as it butts up against the laws of physics. Chipmakers run giant factories that operate 24 hours a day, seven days a week, trying to carve out a return on the billions of dollars required to equip them before they become obsolete. The machinery typically has a useful life of less than a decade.

The process requires a lot of energy, water and toxic chemicals. And though the largest chipmakers have made environmental progress — their use of renewable energy in the U.S. is one highlight — the companies concede that they they have work to do.

Take Samsung, the world’s largest chipmaker by revenue. The South Korean company’s overseas semiconductor sites — in the U.S., Europe and China — already operate wholly on renewable energy. But it’s still working on developing sustainable energy sources in other parts of the world, including in South Korea, where its biggest factories are located. All told, only about 16% of its energy use was from renewable sources in 2021, up from 13% in 2020.