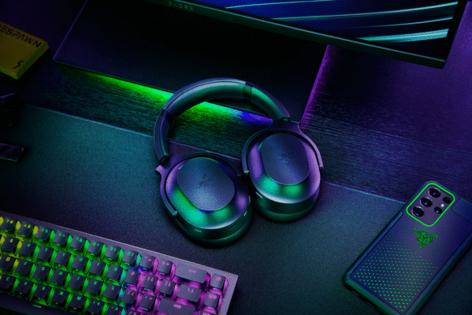 I have always had far too many pairs of headphones. And there’s always been a reason for that. There are Airpods for taking calls when driving, and the classic Astro A50 reigns for gaming. I have separate wireless earbuds for the gym, and I have a wired pair of cans for use with my Nintendo Switch and laptop for long flights.

But what if ... a single headset could replace all of those? Razer’s new Barracuda Pro dares to take this challenge on, and while the latest addition to the Barracuda line isn’t quite an ace-of-all-trades in its big aspirations, it is a versatile headset that’s ready for everything, and perfect for the gamer who travels often.

You can tell Razer’s thinking about this gamer the moment you look at the unit itself. This isn’t the loud gaming headset you’re used to; unlike most Razer devices, it doesn’t even have that subtle green light-up logo. The all-black earcups are an exercise in simplicity and represent a more versatile sense of style. These are the kinds of cans you can wear on the train and at the airport. (And no, they’re not out of place supplying the sound for my latest deadlift session, either.)

Add in the absence of the standard boom mic seen on most gaming headsets, replaced by mics built right into the earcups, and you have a device that wants to be more than a gaming headset. It still wants to deliver hardcore gaming headset performance, though, which is why the price tag ($249) isn’t cheap.

By and large it still manages to deliver a terrific gaming performance true – with one caveat. The Barracuda Pro works with PlayStation consoles, the Nintendo Switch, and PCs, but it won’t work with Xbox consoles. It’s a shortcoming that’s disappointing but understandable; Xbox consoles lack the Bluetooth functionality to communicate with the Barracuda Pro (and many other headsets, too).

Link to a Switch or Playstation 5, though, and you’ll enjoy topnotch sound quality, on par with the best headsets on the market. You get THX Spatial Audio when you game on PC, and it does a great job of indicating the direction of gunshots in games like Call of Duty: Modern Warfare. The earcups deliver a well-balanced sound experience, too, one that, by default, works well for movies, gaming, and music alike. Beats by Dre cans these are not, preferring to focus on a a more versatile, rich sound.

The bass in Michael Jackson’s “Beat It,” for example, is impactful, but it never overpowers Jackson’s voice, just as it never overpowers Tony Stark’s quips during explosions in a viewing of “Avengers: Endgame.” Despite this balance, there’s still enough thump for me to appreciate Eminem’s “Lose Yourself.”

That sound is coupled with solid mic performance, too. Yes, you lose a bit without the boom mic in terms of clarity, but remember: these cans are meant to be versatile, not flawless. The audio isn’t quite what I need as a content creator, but it’s perfect for on-the-road gaming, and it easily exceeds the performance of my Airpods for phone calls, whether I’m in the gym or in my car.

Barracuda Pro’s active noise cancellation is similar to that mic performance: Solid but not quite elite. In practice, the Barracuda Pro doesn’t truly drown out outside sounds, but it does consistently dull them, whether that’s the air conditioner in my home office, or the din of clanking dumbbells, which never quite disappears at the gym. These sounds may leak through, but the Barracuda Pro still does enough to let you focus on the music, movie, or podcast you’re really trying to listen to. It gets the job done.

So too does the overall frame and design. These are exceptionally comfortable headphones, with the earcups offering terrific cushion. They’re also exceptionally stable, with a headband that manages to be secure (even in the gym!) without feeling tight and annoying during long play sessions or flights.

It’s a terrific travel combination, especially when you add in the slim, easy-to-pack hard case, which delivers plenty of little touches of its own. The compartments of the case make it easy for you to keep things organized, even organizing the included USB-C-to-A cable to keep things neat. It’s a touch that underscores how important travel performance is to the Barracuda Pro: This is a headset that’s meant to be for so much more than gaming.

That’s terrifically refreshing, too. There are enough specialty headsets out there, so it’s nice to see a major gaming player creating a versatile product that’s delivers a quality gaming experience, but holds up in lifestyle situations, too. And that’s the true magic of the Barracuda Pro. Hardcore gamers have other options, but if you’re gaming some days, on the road others, and just want to take in music or a movie on others, the Barracuda Pro is a topnotch option.