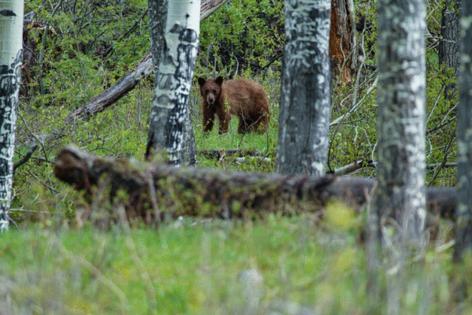 As the family slept, about 2 a.m., the bear stepped on a beach ball outside their tent, popping it, Colorado Parks and Wildlife spokesman Bill Vogrin said in a news release. The noise woke the child, who began to cry.

As the mother moved to comfort her daughter she likely brushed the side of the tent, and the bear apparently swatted at the movement, slashing at her through the fabric, Vogrin said. The woman suffered scratches on her head, and the bear wandered off.

Because the bear made contact with a human the incident is now classified as an attack. If state officials find the bear they will euthanize it, Vogrin said.

“This is an unfortunate incident because the bear was not aggressively pursuing the victim,” Mike Brown, Parks and Wildlife’s wildlife manager for the region, said.

A local wildlife manager set a trap in the campground to try to catch the bear, Brown said. Plus state officials are teaming with agents from the U.S. Department of Agriculture’s Animal & Plant Health Inspection Services. Together, with a team of dogs, those officials are searching for the bear.

As of Saturday, however, the crews hadn’t found the bear.

The encounter comes as experts warn that Colorado’s black bears – the only species left in the state – are growing more brazen in their search for food. This is, in part, because many of the species have lost their fear of humans.

Although a bear did kill a woman near Durango last year, those types of attacks are relatively uncommon. Officials catching, killing or relocating bears, however, are not.

From 2015 to 2021, Colorado Parks and Wildlife euthanized 775 bears and captured and relocated an additional 402, according to data from the department.

A question I get asked a lot is, “When do you know it is time for a new cellphone?”

A lot of possible answers to the question depend on what type of phone you have, how technical you are and the age of your current ...Read More

There’s a unique commentary behind "Xenoblade Chronicles 3," and it grabs you from the very start. In the world of Aionios, soldiers are bred to be killed, and they live preset, finite lives. And when they do die, ...Read More

While the youngest Gen Z is 10 years old and the oldest is 25 years old, Gen Z has one thing in common: We are chronically online. I am living proof of this, as Gen Z slang terms are constantly worming their way into my ...Read More

Apple Inc. is aiming to hold a launch event on Sept. 7 to unveil the iPhone 14 line, according to people with knowledge of the matter, rolling out the latest version of a product that generates more than half its sales.