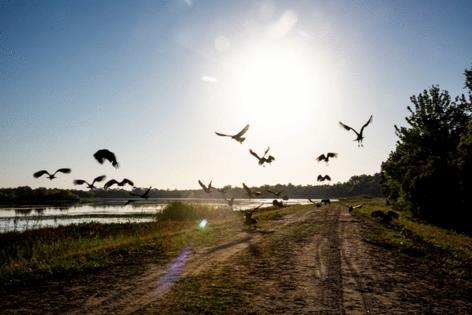 In 2020, Florida became just the third state — and the first in decades — to take over management of a key federal Clean Water Act program. Now, state rather than federal officials decide whether companies can dredge and fill wetlands and waterways for projects ranging from mining to housing developments to roads and bridges.

“Our economy is based on natural resource extraction and development,” said Jason Brune, commissioner of the Alaska Department of Environmental Conservation, which is pursuing a takeover of the program. “Having that predictability and consistency in a permitting process is incredibly important.”

But environmental groups say state regulators are ill-prepared to take on this authority, claiming such efforts are thinly veiled attempts to rubber-stamp development with little regard for its ecological damage.

And some states recently have backed off their attempts to assume permitting control of the federal Clean Water Act program, known as Section 404, citing prohibitive cost estimates and murky jurisdictional guidelines.

“We have the Clean Water Act because states screwed it up the first time around,” said Janette Brimmer, senior attorney with Earthjustice, a nonprofit environmental law group that has filed a lawsuit against Florida over the matter. “The only reason for these states to argue for local control is to have dirtier water.”

Some critics fear that Florida’s move could open the floodgates for more states to claim Section 404 authority, as Alaska, Minnesota and Nebraska are considering. But the hurdles that have mostly stymied such efforts for decades — steep costs, legal challenges and changing federal regulations — remain significant.

The outcome will determine who’s in charge of protecting crucial waterways and millions of acres of wetlands.

The U.S. Army Corps of Engineers is in charge of the Section 404 program’s day-to-day operations and permit decisions, while the U.S. Environmental Protection Agency develops criteria used in evaluating permit applications and reviews individual applications with the authority to deny them.

LOS ANGELES — After hearing hours of heated debate, the California Coastal Commission voted against a controversial plan by the company Poseidon Water to build a huge desalination plant in Huntington Beach.

Now scientists have the first-ever photograph of the...Read More

Elon Musk is in talks to raise enough equity and preferred financing for his proposed buyout of Twitter Inc. to eliminate the need for any margin loan linked to his Tesla Inc. shares, according to people with knowledge of ...Read More

Biologists conducting an necropsy on a sperm whale that beached itself in the shallow waters of the Gulf of Mexico in the Florida Keys said they found man-made materials in the mammal’s stomach that likely contributed to...Read More

WASHINGTON — President Joe Biden, from campaign trail through his first year in office, declared himself a climate-forward leader.

He promised to slash the nation’s greenhouse gas emissions by at least 50% below 2005 ...Read More