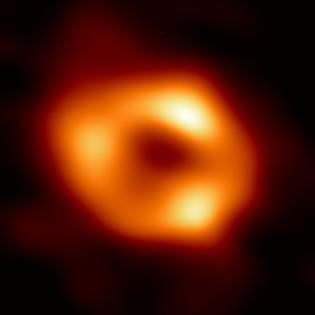 Now scientists have the first-ever photograph of the formidable force at the center of our galaxy: Sagittarius A*, a supermassive black hole with the mass of 4 million suns.

The image, unveiled Thursday, was captured by a network of eight radio observatories at six locations around the world. Together they form the practical equivalent of an Earth-sized telescope designed to see some of the most mysterious and perplexing objects in the universe.

Taking a picture of a black hole is a singular feat, since its signature feature is that nothing within its gravitational grasp can escape — including light.

But astronomers can see the ring-shaped boundary known as the event horizon, and beyond that the golden, gauzy ring of superheated gas and bending light that skirts the edge of the black hole's point of no return.

"What's more cool than seeing the black hole at the center of our own Milky Way?" said Katie Bouman, a Caltech computational imaging professor and a member of the international telescope team.

The results were published today in the Astrophysical Journal Letters.

Black holes are the densest objects in the universe. When a giant star explodes in a final, dramatic supernova, its collapse creates a tiny clot of matter so dense that its gravitational pull warps the fabric of space and time around it.

Scientists have long suspected that supermassive black holes lie at the center of every galaxy, including our own. Yet despite their colossal size, they're an elusive presence in the universe, observable only by their influence on the objects around them.

Capturing an image of an object from which no light can escape is the monumental challenge the Event Horizon Telescope consortium set out to tackle back in 2009. The effort involves the collaborative work of more than 300 scientists and engineers at 80 institutions around the globe.

LOS ANGELES — Striking a blow against a pernicious form of pollution, California lawmakers on Thursday passed the nation’s most far-reaching restrictions on single-use plastics and packaging, with Gov. Gavin Newsom ...Read More