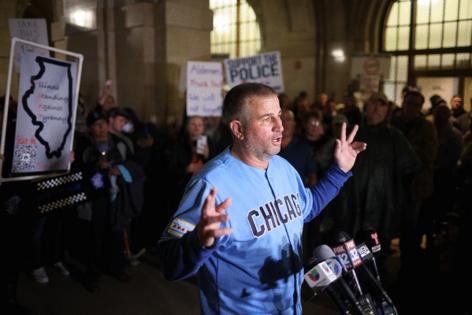 While the change to the state’s Health Care Right of Conscience Act was meant to provide greater clarity, its passage promises to only fuel the ongoing debate over vaccine mandates and provide Republicans a heated issue to use in next year’s elections against the Democrats who control Springfield.

“I think mandates are just polarizing,” said state Sen. Patrick Joyce of Essex, one of six Democrats in the chamber to vote against the measure. “You can look at whether a mandate is one way or the other, it’s a mandate and I think that in today’s political climate, that’s pushing people to do things that they wouldn’t normally do.”

The measure, signed Monday by Gov. J.B. Pritzker, says an act originally intended to protect health care workers from having to provide abortions or other reproductive services that go against their morals or religious beliefs doesn’t apply to vaccines or other measures intended to slow the spread of the coronavirus.

Lawmakers acted to confront several lawsuits challenging vaccine mandates and testing requirements from employers. The Illinois attorney general’s office is representing the state in nine such lawsuits in state and federal court, and monitoring two others in which the state is not a defendant.

“This litigation could impact hundreds of thousands of teachers, state and local employees across Illinois, and recent court filings have relied on misinterpretations of the Health Care Right of Conscience Act, demonstrating a need for clarification,“ office spokeswoman Annie Thompson said in a statement.

While Republican lawmakers have continuously derided Pritzker for unilaterally imposing COVID-19 mandates and were united in opposition to altering the law, some Democrats also had concerns over the change. Thirteen Democrats in the House and Senate sided with Republicans in voting no.

Joyce stressed he wants everyone to get the COVID-19 vaccine, but he didn’t feel the law change was the right solution and “ultimately the vote was to represent my constituents” more than a reflection of his personal feelings.

“The goal of what this clarification was doing was a goal that is going to help more people get vaccinated,” he said. “So, from that respect, it’s a tough call.”

Democratic Sen. Doris Turner of Springfield gave a similar rationale for her no vote, saying she feels “very strongly about vaccination” but felt she had to respect the concerns of others.