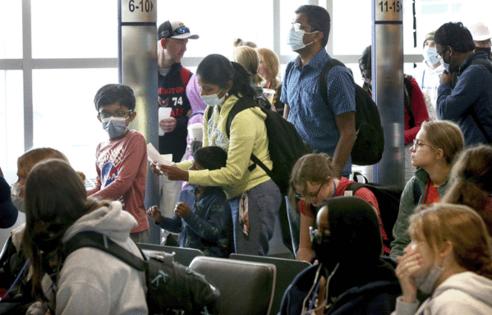 Back in November, I collected some data during a flight delay at a Chicago-area airport and found that the majority of travelers (85% to 90%) were adhering to the federal transportation mask mandate in place at the time. When the mandate ended in April following a court decision, many rejoiced in their new maskless freedom.

As a data scientist, I am always looking for data sets to collect and analyze in the hope of revealing some properties of a system or glean some insights.

During a recent rain delay at the same airport, I was surprised to see a sizable number of travelers wearing face masks. This presented a great opportunity to see how masking behavior has changed now that no one is being forced to mask up.

Here is what I observed:

The ratio of male to female travelers was around 60% to 40%. This is fairly consistent with data on air travel frequency by gender for 2015, as reported by Statista.

My primary interest was assessing the rate at which travelers were wearing face masks, which turned out to be 25%.

Broken down by gender, 35% of female travelers were wearing a face mask versus 17% of male travelers. Based on the size of my sample, these estimates are accurate to within a 3% margin either way.

This means that women are donning face masks about double the rate of that of men. Also noteworthy was that those who were wearing face masks tended to wear them correctly over the mouth and nose.

What was surprising was that couples or groups of people traveling together were not always following the same masking protocols. It was common to see a woman wearing a face mask while her male traveling companion was not doing so. The reverse situation was far less common.

Though I did not explicitly account for age when collecting the data, there appeared to be no obvious pattern among women, while for men, older men were more likely to be wearing a face mask compared with their younger counterparts.

This data collection exercise was by no means done with scientific rigor. I chose a central location in a concourse and began noting the face mask status of every person who passed by me. Based on the time I spent collecting data and the number of data points collected, a person crossed my path around once every six seconds on average.

Drawing broad conclusions across all airports and all air travelers would be difficult to justify. It is reasonable to expect that geographic differences exist, so there may be fewer people masking at Hartsfield-Jackson Atlanta International or Dallas Fort Worth International, and more masking at Los Angeles International or Boston Logan International. The only way to assess this is by collecting data at these airports and performing a similar analysis. The insights provided here are nonetheless informative.

Even without a mandate, a significant number of people continue to wear face masks. Moreover, women are much more likely to do so. Whether this is due to the perception that wearing a face mask is socially beneficial to the people around you and that women are more sensitive to this benefit is unclear.

If the Department of Justice is successful in having the transportation mask mandate reinstated, what is clear is that around 75% of air travelers will not be happy. The likelihood of the appeal being successful is also low. With so many people not supporting mask mandates in general and the midterm elections just a few months away, the Biden administration may even hope that it is unsuccessful.

Air travel passenger volume is now approximately 90% of pre-pandemic levels. This is despite airlines intentionally reducing their schedules to make air travel operations more reliable. Travelers wearing face masks in airports or on airplanes has become a personal decision.

Unless there is a major surge in COVID-19 hospitalizations and deaths, or some new highly virulent variant emerges that changes the health risk landscape, the downward air travel masking trend that the data collected reveals is certain to continue.

Sheldon H. Jacobson is a professor of computer science at the University of Illinois at Urbana-Champaign.

BOSTON — “Varsity Blues” moms and dads are back to their jet-setting ways hobnobbing in Fiji, Ireland, England, Scotland, Turkey and Germany.

But one college admissions cheater on home confinement isn’t so lucky. ...Read More

DETROIT — Forty-one countries away from hitting her goal of traveling to every country in the world by the age of 35 — and becoming the first Black woman to do it — Detroiter Jessica Nabongo was over it. Over the ...Read More

WASHINGTON — The Biden administration is lifting its requirement that all travelers test negative for coronavirus before flying to the U.S., amid pressure from airlines that viewed the measure as excessive and blamed it ...Read More

The Biden administration is lifting its requirement that international travelers test negative for coronavirus before flying to the U.S., amid pressure from airlines that viewed the measure as excessive and blamed it for ...Read More

International tourists are gradually returning to Florida and the rest of the United States, but some potential travelers aren’t booking vacations because of COVID testing requirements, inflation and gun violence, ...Read More