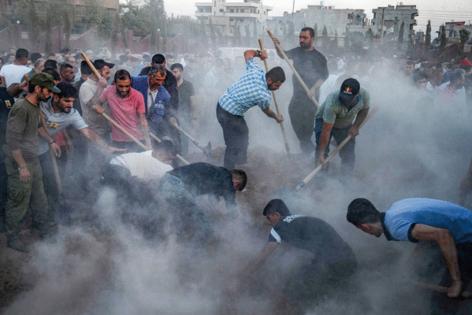 Syria’s civil war, which entered its 11th year this March, may at first look like a clear-cut case of good versus evil, in which a bloodthirsty dictator, Bashar Assad, tries to snuff out any semblance of opposition to his rule. Yet, the conflict is far more complicated than that. Far from being a game of checkers, Syria best resembles an unsolvable Rubik’s Cube, in which the different sides are rarely in alignment.

While the Syrian government has recaptured approximately two-thirds of Syrian territory with the help of its Iranian and Russian partners, the territory outside Damascus’ control is divided among a jihadist faction in the northwest of Idlib, Turkish-supported militias in the north, the Syrian Kurds in the northeast and a smattering of Islamic State cells in the east and center.

Those forces often clash as they did last week, when Turkey, a NATO ally, conducted airstrikes against the Kurdish-dominated Syrian Democratic Forces, or SDF, in retaliation for what Ankara says was a Nov. 13 Kurdish terrorist attack in Istanbul that killed six people. Turkish President Recep Tayyip Erdogan has threatened another ground offensive against Syrian Kurdish positions in what would be the fourth major Turkish military operation in Syria since 2016.

In the middle of this mess are hundreds of U.S. troops who remain stationed in Syria, ostensibly to support the SDF’s anti-Islamic State operations. Turkish operations in Syria wouldn’t ordinarily be that newsworthy, but last week’s came dangerously close to U.S. positions. According to the Pentagon, Turkish strikes came as close as 300 meters to where U.S. forces were based.

This isn’t the first time U.S. troops in the area have come under fire by Turkey. In October 2019, during another Turkish military campaign in northern Syria, U.S. forces in Kobani, a city along the Turkey-Syria border, endured Turkish artillery attacks. Fortunately, no Americans lost their lives, but the attack caused significant blowback to the U.S.-Turkey relationship as a whole and only reiterated a belief in the minds of U.S. officials that Erdogan was willing to put relations with Washington in jeopardy if it meant neutralizing an enemy he regards as a direct threat to Turkish security interests.

Whether the Turks intend to carry out a ground incursion across the border, only time will tell. But the last week of airstrikes has placed the U.S. in an unenviable position. A NATO ally warring against a critical partner in the anti-Islamic State campaign isn’t a situation Washington is eager to deal with. The Biden administration has been walking on eggshells, stressing the need for all parties to de-escalate so everybody’s focus can remain on the Islamic State group. Yet, the Turks aren’t afraid to ruffle feathers in Washington; Erdogan is a notoriously prickly individual whose political brand is that of a nationalist who strongly believes foreign powers have no right to dictate what is and isn’t in Turkey’s national interest. Even if the Biden administration strongly warned Turkey to cease and desist, it isn’t clear Erdogan would listen, particularly on a matter as core to the Turkish security elite’s as subduing any form of Kurdish opposition.

Even worse for Washington, Turkey and the Syrian Kurds aren’t without leverage of their own. Erdogan recognizes the U.S. wants Sweden and Finland to officially join NATO. That can only occur with unanimous consent of the entire alliance, which means Turkey has de facto veto power over which country can become a member. While Ankara hasn’t specifically connected Finland and Sweden’s accession with operations in Syria, it wouldn’t be surprising if Turkey decided to deliberately stonewall confirmation of their applications until a hypothetical Turkish military incursion is complete. (Turkey and Hungary are the only two NATO countries whose legislatures have yet to approve those applications.)

The Syrian Kurds also possess some leverage, and they are hoping to use it to press the Biden administration to pressure the Turks to stand down. The SDF guards the network of camps holding IS fighters and their families, including the massive al-Hol camp with a population of more than 60,000 people. The SDF provides the most of the ground troops against IS holdouts in the east, and Mazloum Abdi, commander of that force, has stated that anti-IS operations have already stopped so Kurdish fighters can prepare for what he believes is in imminent Turkish invasion. The not-so-subtle implication to the White House: Get the Turks in line or risk watching the Islamic State’s territorial caliphate come back.

It’s difficult to see how those threats are credible. For one, the U.S. isn’t the only player that wants to prevent such a scenario from unfolding. Whether it’s Assad, the U.S., Iran, Iranian-backed militias, Russia or Turkey, it’s in nobody’s interest to see a resurrected Islamic State territorial caliphate.

This is especially true with the Kurds, who saw their community pillaged in 2014 when IS fighters were rampaging across Syria and Iraq. While the Kurds proved to be an indispensable partner for the U.S., it’s important to note that Kurdish units weren’t fighting the Islamic State group to do the U.S. any favors — they had a strong, unique incentive to defend their people from the nihilism the /militant organization represented. To believe the Kurds would simply stop fighting the Islamic State group if the U.S. failed to persuade Erdogan to refrain from a ground incursion is to believe the Kurds themselves are incapable of doing what it’s in their own best interests.

This entire affair obscures the key questions U.S. policymakers should be asking. Why, more than 3½ years after the Islamic State group lost its territorial caliphate, are nearly 1,000 U.S. troops still in Syria to begin with? And if the answer is “to keep a lid on the Islamic State,” then at what point can the U.S. military pack up and leave?

Daniel DePetris is a fellow at Defense Priorities and a foreign affairs columnist for the Chicago Tribune.

WASHINGTON — The United States is locked in a delicate dance with Turkey, one of its most problematic allies, that involves fighter jets, the North Atlantic Treaty Organization, Congress and, ultimately, the war in ...Read More

WASHINGTON — Ceding to a long-standing Turkish demand, the State Department on Thursday agreed to begin spelling the country's name in Turkish in its official documents.

Turkey will now be referred to as "Türkiye," ...Read More