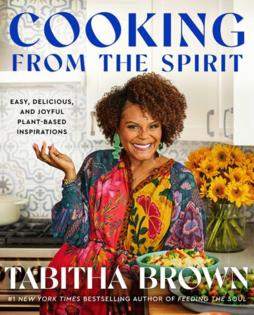 When Tabitha Brown, the actress and star of the Food Network competition show "It's CompliPlated," went vegan five years ago, she lost 12 pounds. But when the 43-year-old mom, wife, and culinary queen of positivity mastered the art of making that mimicked meatloaf and mashed potatoes, seafood salad, cheesesteak hoagies, and peach cobbler without meat, fish or dairy, she got, "right back thick."

And she's OK with that because her husband loves her that way.

Brown shares her tasty journey to veganism in her new cookbook, "Cooking from the Spirit: Easy, Delicious and Joyful Plant-based Inspirations."

Brown's tour to support the cookbook is delighting her dedicated fans who recently stood up for her on social media after Food Network moved "It's CompliPlated" from a coveted Thursday at 10 p.m. time slot to Tuesdays at 1 p.m. After the move, Brown suggested in a social media post the Food Network as trying to stop her from being her authentic self. Her show, she said, is flourishing because her fanbase "is so loyal." Like dishes the chefs prepare on "It's CompliPlated," Brown's book provide audiences with plant-based recipes.,

Her 184-page cookbook features recipes that call mostly for fruits and vegetables, although a few require canned tomato sauce or egg and meat substitutes. But don't expect any measurements with the lists of ingredients. "I don't cook from a recipe," she writes in her cookbook, "and I don't measure anything. I just add what I like and I do it until my spirit tells me to stop."

Each of the recipes comes with an inspirational quote, or Tabism, that celebrates the universe, inspires the cook, and fills the diner with nutrition and love.

We talked to Brown about her vegan journey toward and her need for authenticity. Answers have been edited for length and clarity.

Q: We will get to the food, but let’s talk about your voice. It’s so soothing and it’s the most recognizable part of your brand.

A: You know what's crazy? I hid this voice for so very long. Oh yeah girl, I didn't walk into my freedom until about five years ago. I was code switching and covering up my accent for 20 years. Only at home, when I was with my family, would I be this person. But if you meet my aunts and my cousins and my sisters, we all have this voice. We all have a deep tone to our voice and we are very much Southern or as we would say, 'We country.' I spent a lot of time with my grand-daddy, really my great-grandfather when I was a little girl. And just being around a lot of older people when I was young, they always said, I had an old spirit. I hid my accent thinking it wasn't enough. I believed it when people told me that I sounded ignorant. Thank God for freedom. Thank God for me waking up and choosing me and being who God created me to be. Honey, that's what changed my life.

Q: Is this why your message of self-love guides you and is so important?

A: Once I walked into my freedom, it became my responsibility to show other women, who look like me, guess what, we are enough. When I was code switching, I tried to make everyone else feel comfortable. It's exhausting and it's not my stress to carry. Conforming doesn't belong to us. It's so very important for us to 100% of the time be our authentic selves 100% of the time.

Q: Tell me about your path to veganism.

A: I got sick. I had a headache in the back of my head, and it was there for every day for a year and seven months. Nothing could make it go away. It was exhausting. I had fatigue and pain throughout my body. I lost my vision for a day. I thought I was really going to die. My daughter came home from school one day and told me about a documentary she saw in school, "What the Health." So we decided to undergo a 30-day vegan challenge. After the first 10 days, the headache I had for a year and a half disappeared. Energy started to come back to me and I decided, 'This is going to be my life, I'm never going back.' Five years later, honey, here I am.

Q: Is your family vegan now?

A: No. My daughter was vegan with me for three years, but she went back to eating fish and chicken. My husband went back to fish and chicken after two years. My son, who is 10, has never been vegan. But he will tell anybody he eats vegan food cause that's what his mama cooks.

Q: How did you come up with these recipes?

A: I just cook from the spirit, honey. This book is really for people who would like to try vegan. Basically, I made all of my traditional, non-vegan recipes vegan. This is what helps with the cravings. People can go, 'Wait, I can do this,' There are spaghetti recipes, meatloaf. I found that if you have things that people eat all of the time vegan, people are more inclined to try it and make it.

Q: But what about cheese? I love cheese.

A: There are so many vegan cheeses that are amazing. I mean mind-blowing. There is a cheese called Follow Your Heart. I just had some of the blue cheese and it tastes exactly like blue cheese made from dairy. I'm allergic to dairy so I had to cut back before I even went vegan. But trust me there are a lot of versions out there. I do understand cheese lovers, though.

Q: What's it like being the person who has convinced so many people — especially Black people and people of color — that we can go vegan?

A: I'm grateful to be the vessel. When I used to hear vegan I thought it was for white women who did yoga. I thought it was a cult. It feels good to be a Black woman who makes food that can heal us. I'm so grateful that people are so inclined to try my food. I never tell anyone they should go vegan, I simply share my life in the hopes they will try it.

Preheat the oven to 450 degrees Fahrenheit. Line a sheet pan with aluminum foil or parchment paper.

Put your flatbread on the lined sheet pan. Using a pastry brush or a spoon, spread on sauce.

Sprinkle cheese on top to taste. Add your olives, mushrooms, pineapple, bell pepper, purple onion, and spinach, spreading the ingredients all across the surface of your pizza. Sprinkle the garlic powder and everything bagel seasoning on top, then add a few pinches of salt. If you want add more cheese shreds to hold it all together.

Bake for about 10 minutes, then turn your broiler on high and broil for about 2 minutes to brown the veggies on top.

Coconut or avocado oil spray, for the pan

Pinch of ground cinnamon (add a little more if you want more, honey)

One 7.4-ounce can condensed coconut milk

One 29-ounce can sliced peaches in heavy syrup

Preheat the oven to 350 degrees Fahrenheit. Spray the bottom and sides of a 9- or 10-inch deep-dish pie plate or square baking pan with oil.

In a medium bowl, whisk together the flour, sugar, and cinnamon. Add the condensed milk and use a spoon to stir until no more bits of flour are visible and the ingredients come together to form a dough.

Pour the melted butter into the prepared pie plate. Make sure the butter covers the bottom.

Transfer the dough to the pie plate. You can spread it out a little, but don't worry about it if you don't feel like it. The oven is going to do most of the hard work for us.

Pour the peaches with their syrup on top of the dough. Pour the vanilla on top, and add a little more cinnamon there if you want to.

Bake until the peaches are browned on top and the crust is golden brown, 50 minutes to 1 hour. (Slide a sheet pan onto the rack below the cobbler while it bakes to catch any juices.)