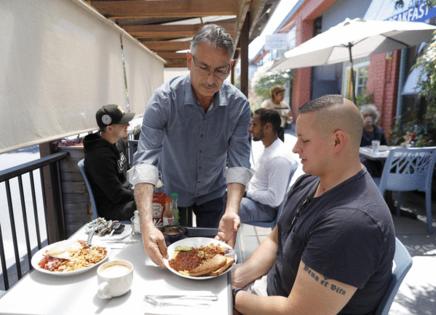 Barely two weeks had elapsed during the first COVID-19 lockdown before she and her husband, George Masarweh, returned to unlock the doors of the Emeryville eatery they’ve owned for more than three decades — just in case.

Every time Viviana, 56, saw someone walking by the restaurant, she rushed to offer them a cup of coffee, a sandwich or anything else she could whip up.

“I was crying every day. Every time I would see anyone — oh, my heart — it was emotional,” Viviana said.

A lot has happened in the two and a half years since those forsaken pots of coffee.

Tucked away in a cozy residential corner of Emeryville, Doyle Street Cafe’s story isn’t about a tragic closure, a grandiose reopening or a trendy new menu, designed with delicious virality in mind.

Rather, the continuing legacy of this classic breakfast and lunch spot – known for its array of scrambles, Benedicts, salads and sandwiches made from scratch – is one of how Bay Area family-run restaurants persevered through the pandemic to stay open through dedication, teamwork and a bit of luck.

According to the National Restaurant Association, the pandemic shut down approximately 90,000 — or 14% — of restaurants in the United States as of May 2021.

But just as two of the Bay Area’s most-celebrated chefs — David Kinch of Manresa and Aaron London of AL’s Place — are making news by stepping away from their Michelin-starred restaurants and others like Carlos Carreira of Michelin-starred Adega in San Jose cast fine-dining destinations as a “dying breed,” some mom-and-pop restaurants like Doyle Street Cafe are carrying on, despite the obstacles, as the heart and soul of their communities.

Vincent McCoy, director of the East Bay Small Business Development Center, said the group’s research shows that most small eateries only have enough cash on hand to stay afloat for 45 days without money flowing in. But when a beloved neighborhood joint is on the brink of closure, local, tight-knit communities often rally behind them.

“People like to be able to see the owner of a business — they like to know their story and will trust them with their dollars if they are connected to the community,” McCoy said.

“Those Michelin-star restaurants, very few people will ever eat there,” Ichikawa said. “We should pay more attention to our local restaurants because they are economic drivers in our community, they hire our friends and family, and — if they pay livable wages — they help the community prosperity.”

At Doyle Street Cafe and other mom-and-pop restaurants, the focus isn’t on rare ingredients or the art of plating a meticulous dish, but on fostering connection and conversation over comforting meals.

“When you put your food on a table and you see that happiness, this is our life,” said George, whose brother Albert jovially manages the front-of-house operations alongside Viviana. “This is joy for us. This is our home.”

The restaurant was able to avoid laying off staff, eventually welcoming back diners with the help of several citywide business initiatives and — perhaps most importantly — word of mouth.

Delivery and takeout saved the day until some in-person dining started trickling in around August 2020, and by August 2021, a parklet ushered in more business. But it took until this month for the Masarwehs to feel confident they were really back to where they’d been before COVID struck.

“When we got back to work, we had no idea whether we were going to get customers or not, so to me, it was like we had just opened a new restaurant again,” George, who will celebrate his 60th birthday in September, said.

Ricardo Aguayo, 49, dropped by Doyle Street Cafe for a mimosa and turkey scramble while visiting his old neighborhood for the first time since 1999.

“I never knew they had this parklet, but it’s perfect — casual, not too crowded, not pretentious — this is my type of vibe,” Aguayo said.

But word of mouth, parklets and delicious food don’t always cut it; East Bay foodies lamented earlier this month when Rudy’s Can’t Fail Cafe wasn’t able to live up to its name and abruptly closed its Emeryville doors for good.

“I always want Emeryville to stay competitive and full of great restaurants, so that doesn’t feel good,” George said.

Emeryville Mayor John Bauters first stumbled into the Doyle Street Cafe when he started renting a place around the corner a decade ago. He’s been a loyal customer ever since.

In between bites of his go-to Heavenly Hash — add bacon, eggs over-easy — and sips of orange juice or a mimosa on special occasions, Bauters said the personal connections he has made with the staff and other diners keep him coming back.

“This is a place where the community gets to know each other, it’s a convening place for people,” Bauters said. “This is the product of their work and their investment in the East Bay – not a faceless corporation.”

In May, the Emeryville City Council voted to allow the city’s restaurants to permanently set up tables on sidewalks, parking lots and in parklets.

While these “streeteries” haven’t gleaned universal approval, Emeryville’s handful of now-permanent permitted parklets are far from alone in embracing the out-of-the-box solution in the Bay Area; Oakland, for example, is home to roughly 140 sidewalk cafes and parklets.

“It’s one of these places you can’t get anywhere else,” he said. “I think they’re one of the places that makes Emeryville a great place to live.”