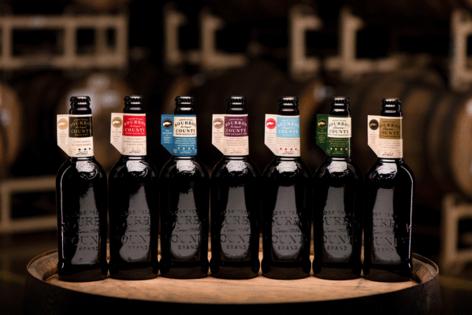 As always, the beers — six stouts and one barleywine — will be available the day after Thanksgiving. The flagship, Bourbon County Stout, is widely considered the first modern beer aged in bourbon barrels, a practice that has become an industry hallmark. Expanded into an entire family of beers, the lineup has been hit-and-miss in recent years, with some towering achievements (looking at you, Birthday Bourbon County Stout) and a few head scratchers (what were you exactly, Bourbon County Reserve 150 Stout?).

One disclaimer: As you’ll see below, Goose Island is celebrating what it calls the 30th anniversary of Bourbon County Stout; the brewery says that beer was introduced in 1992. But as I wrote in 2016, while reporting for my book about Goose Island and its sale to Anheuser-Busch, this is likely incorrect.

In my reporting, I concluded it was most likely released in 1995. Coincidentally, esteemed beer writer Jeff Alworth wrote a similar story about the same time and suspects it was probably released in 1994. He also reported former Goose Island brew master Greg Hall acknowledging that 1992 “was always a guesstimate” because “the original brewing log has been lost.”

All that said, Goose Island clings to the 1992 mythology. So be it.

As for those NFTs, well, it was an audacious idea when announced in May: 2,022 Bourbon County NFTs, or Non-Fungible Tokens, available for $499 each, offering digital Bourbon County images along with real world value that included access to Bourbon County events and beer. Though the price was dropped to $399 amid a crashing cryptocurrency market, Goose Island sold just 305 of the NFTs before ending the sale after two weeks.

Some things are just better in the glass than on your phone.

And as for this year’s Bourbon County lineup, here it is, broken into three categories:

As always, the anchor of the lineup will be Bourbon County Stout (14.4% alcohol), an approximation of the original created in 1992 — or perhaps 1994, or maybe 1995. There’s a cruel irony about this beer: It’s released every year, and in ample amounts, but hardened beer fans tend to overlook it even or ignore it completely. In a world where novelty is prized, there’s not much new about Bourbon County Stout. But here’s the thing: It’s still an outstanding beer!

It was, in fact, my preference among last year’s lineup, which I tasted several times to be sure I wasn’t being needlessly counterintuitive by championing it over rarer and more expensive Bourbon County beers. But, sure enough: It was my favorite of the eight beers. It proved “the most balanced, with the most interesting depth of flavor.” No reason to expect it won’t be more of the same this fall with the usual notes of vanilla, chocolate (which can veer milky, fudgy or dark, depending on the year), dried fruit, oak and hints of coffee. This beer is blended from barrels from the Heaven Hill, Four Roses, Wild Turkey and Buffalo Trace distilleries.

There will likely be considerable more interest in another classic, Bourbon County Coffee Stout (alcohol content unavailable), a longtime fan favorite that will be released for the first time since 2017. This version is made with Intelligentsia Coffee’s Turihamwe blend from the African country of Burundi, which Goose Island says produces notes of “rich chocolate, coffee and caramel flavors.” It’s hard to beat a well-made barrel-aged coffee stout and for several years, Bourbon County Coffee was among the finest. We’ll see if Goose Island can recapture the magic.

These two beers will likely be the big-ticket items, both in terms of price (which will be announced closer to the release) and the amount of curiosity among Bourbon County fans.

This is Goose Island’s first Bourbon County barleywine since 2018. The earliest Bourbon County barleywines, in 2013 and 2014, were beautifully constructed. The years after were a bit uneven. Here’s hoping for a return to the old days, and a blend from barrels of such pedigree is cause for optimism. Goose Island says to look for notes of “toffee, cherry, vanilla, fig and almond.”

If nothing else, it will be interesting to chart how this beer compares with the “regular” version of Bourbon County Stout. The base beer is the same, but the different barrels should lead to a marked difference in flavor and aroma.

Barrel-aged stouts have taken on an inordinate number of flavors in recent years, often echoing an array of sweet treats. Goose Island has remained committed to the motif, and with mixed results. They seem to be the beers least popular in the Bourbon County series, and the ones inevitably marked down to astonishingly low prices months after release — but here we go again anyway.

Inspired by the classic Italian dessert, Bourbon County Biscotti Stout (alcohol content unavailable) is made with cocoa nibs, toasted almonds, anise seed and what the label describes as “natural flavors.” Look for hints of black licorice, marzipan, cocoa and buttered toffee along with “strong notes of nostalgia from your Italian grandma’s kitchen,” the brewery says. That’s a lot of flavor in a beer, and if it’s balanced enough to be worth drinking 8 ounces, it’ll be a win.

The words “Fig Newton” appear nowhere here, but Bourbon County Sir Isaac’s Stout (alcohol content unavailable) is clearly nodding in that direction, named for the legendary English scientist and touting 10,000 pounds of Black Mission figs, graham crackers and still more “natural flavor.” The result, the brewery says, is a beer with notes of “dried fruit, honey, molasses and citrus, all reminiscent of the classic fig cookie sold on shelves today.”

Goose Island says its brewers have spent years trying to find “ways to incorporate figs in Bourbon County Stout but faced a daunting task due to their subtle flavor.” I’m skeptical of the graham cracker addition, but figs could mingle nicely with the beer to come to an interesting result.

Lastly is the annual Bourbon County Proprietor’s Stout (alcohol content unavailable), sold only in the Chicago area. This year’s version is a take on the fruity, rum-based jungle bird cocktail; the beer is made with banana, coconut, lime and, as a first-ever ingredient in Bourbon County history, pineapple.

Ingredients such as coffee and coconut can work splendidly in barrel-aged stout because they echo the deeply roasty character of the beer. Others, such as lime and pineapple, could easily do no such thing and cause more angular conflict than harmony. I’m not banking on this beer working. But we’ll find out in November.