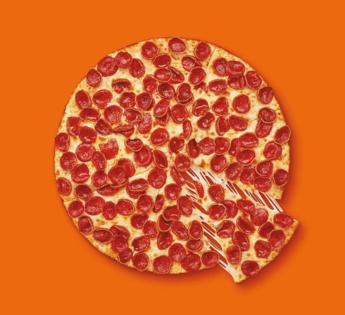 Detroit pizza company Little Caesars has announced its latest creation will come with a whopping 100 pieces of curled-up, crisp pepperoni.

They're calling it the "Old World Fanceroni Pepperoni" pizza, and it is covered edge to edge in pepperoni. With eight slices, that's more than a dozen pepperonis per piece of pizza.

The Fanceroni is now available online for pickup or delivery. It is also available as a Hot-N-Ready item 4-8 p.m. daily. The $9.99 pizza will be offered for a limited time only and is being marketed as a "fancier" version of their regular pizza.

Little Caesars, which recently became the official pizza of the NFL, is a Detroit-based brand founded by Mike and Marian Illitch in 1959 in Garden City and has grown to be the third-largest pizza chain the world.

Snickers bar fans will be able to enjoy the taste of their favorite snack on almost anything, as the candy bar has been transformed into a seasoning.

The topping of this caprese-like chicken gets nice and melty on the grill. While you’re there, crisp up some crusty bread to serve alongside. It’s great for soaking up all the flavorful juices left on your plate.

Imagine a platter of vibrant red and sunny yellow sweet peppers and grilled purple eggplant slices, with fresh basil leaves as a garnish. This colorful vegetable mix is my fallback summer dish, for lunch and dinner. A ...Read More

In the summer when the markets are overflowing with fresh tomatoes, I pick the plumpest beefsteak varieties. I slice and stack them in a BLT, layer them with fresh mozzarella to compose a classic caprese salad, or blend ...Read More

Technically, there is no wrong way to freeze blueberries. This is especially true if your goal is simply to keep the blueberries from going bad. Some people recommend just throwing a pint container into the freezer and ...Read More