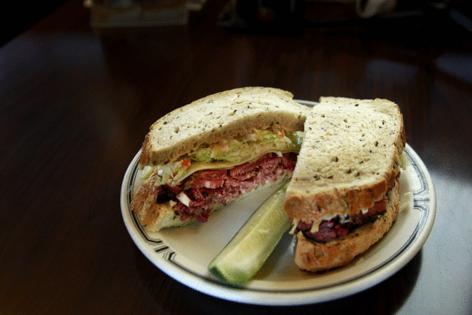 LOS ANGELES — The long, slow decline of the Jewish delicatessen has been bemoaned and lamented for many years.

In the early 1930s, there were more than 1,500 kosher delis and many more non-kosher ones in the five boroughs of New York alone, according to city records.

In recent years, the estimate fell to 150 in all of North America.

That's why it is a cause for celebration that Langer's delicatessen, the venerable pastrami emporium on 7th and Alvarado near MacArthur Park, marked another milestone birthday last month. The restaurant, which opened with space for 12 customers in June 1947, is now 75 years old.

Langer's is, of course, a Los Angeles institution.

In 1991, Jonathan Gold wrote in The Times: "The fact is inescapable: Langer's probably serves the best pastrami sandwich in America."

In 2002, Nora Ephron went farther, declaring unequivocally in the New Yorker that Langer's made the finest hot pastrami sandwich in the world. She described it as "soft but crispy, tender but chewy, peppery but sour, smoky but tangy."

And, if I may be so bold, my recent lunch of matzo ball soup and hot pastrami on rye with sauerkraut confirmed — to my satisfaction, anyway — that those assessments still hold.

Of course, if you don't want pastrami, there are alternatives. You can have the corned beef (Mimi Sheraton called it "excellent" in a 42-year-old review that still hangs, fading now, in the restaurant's window). Or blintzes, kasha varnishkes, latkes, a bowl of borscht or a knish with gravy. For dessert, noodle kugel. I guess you could also order the hamburger or even — don't tell the ancestors, please — a ham and cheese sandwich. But that would be foolish.

Ephron was snide about the decor. "It is decorated, although 'decorated' is probably not the word that applies, in tufted brown vinyl," she wrote. That was 20 years ago, and that's pretty much how it still looks today.

She noted that Langer's always seems to be just barely hanging on. That's also still true.

The sufferings of Jewish delis over the years have been legion, the challenges monumental: There's the passing of the shtetl generation and its children. The assimilation of its grandchildren. The dispersal of the Jewish population from the cities to suburbs (and, in the case of Langer's, from Westlake-MacArthur Park to the San Fernando Valley and the Westside).

Rising rents. The climbing costs of ingredients. The tut-tutting of cardiologists everywhere, what with all the fat, carbohydrates and salt.

More recently, the COVID closures. And now, a new burst of inflation.

The price of a pastrami sandwich at Langer's rose recently to $22, a number that even its owner, Norm Langer, concedes is meshuga.

Langer is 77 years old. He says he has no plans to retire. "I get up in the morning, I've got to go somewhere," he says. "Everybody needs a place to go."

The restaurant was opened by his father, Al Langer of Newark, New Jersey, who'd gotten his start in delis years earlier when his mother sent him to work to raise money to help pay for his $35 bar mitzvah. In 1947, Al was living in L.A., was recently out of the service and had saved $500. He borrowed a few thousand more.

In those days, the Westlake-MacArthur Park neighborhood had a big, middle-class Jewish population. At one point the restaurant had so much business it stayed open nights until 3 a.m. Now it closes at 4 p.m.

In the 1980s, The Times wrote endless stories about the troubles facing the deli because of the changing neighborhood, including one histrionic article about MacArthur Park headlined "Winos, Dopers, Crime Overrun City Landmark." But Langer's hung on.

The restaurant got a needed boost in 1993 when Metro's Red Line opened, with a subway station just a block and a half away. Crowds flocked in from downtown.

"I saw 500 people lined up to get into Langer's and I told Norm, 'It was worth spending $1.2 billion to keep you in business,' " said then-County Supervisor Zev Yaroslavsky, a regular.

In L.A. today the delis that still exist include Canter's, which opened in 1931 in Boyle Heights and only later moved to its location on Fairfax. Also Art's Deli, Nate 'n Al's and Wexler's. There's Brent's Deli. To name just a few.

But they keep closing down. Izzie's in Santa Monica shut its doors in May. Greenblatt's in West Hollywood closed in 2021 after 95 years.

New delis have opened, in some cases with modern, sustainable or health-conscious twists on the classic cuisine. Less shabby, less irascible, they're gambling that deli food can be gentrified and rejuvenated.

But pastrami, let's face it, is an acquired taste. So are creamed herring, chicken liver, tongue, whitefish salad and other old country staples. The bagel may be firmly embedded in the American food pantheon, but traditional Ashkenazi deli fare of the sort that flourished in the years after the great Jewish immigration from Eastern Europe is unquestionably endangered.

And with it a tangible link to the culinary past. A connection to the forefathers. A piece of the collective culture.

The good news is that reports of its extinction have proved premature so far, as Langer's demonstrates. So rather than rend my garments, I'll make the most of it while I can (and hope my heart holds out).