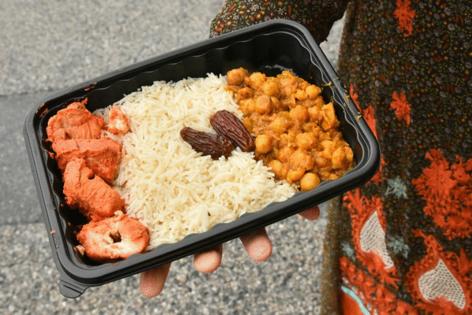 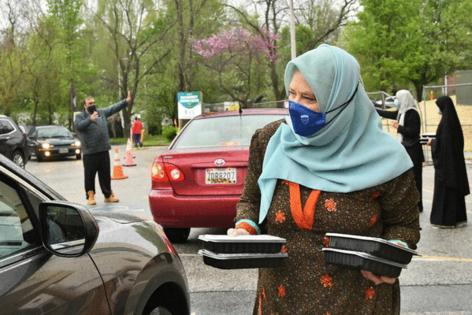 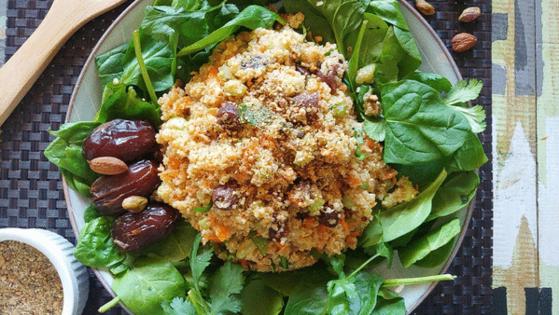 CHICAGO — The table for iftar — the meal marking the end of a day’s fast during the Islamic holy month of Ramadan — is traditionally filled with chewy dates, water, bite-sized snacks and dishes that make an appearance but once a year.

Like most people finding ways to make this second pandemic Ramadan feel special, 29-year-old Ahmetovic and her family have been cooking up traditional Bosnian dishes on Chicago’s Northwest Side.

In the final fasting days ahead of May 13′s Eid al-Fitr, or the Festival of Breaking the Fast, the family has enjoyed cooking together more by virtue of having more time on their hands, and because this year, the month has a little bit smaller of a footprint.

“Our house is kind of like a train station full of people invited over for iftar — if not every night, at least three or four times a week. I’m not complaining; we love having people over,” she said. “But when you have guests, you can’t really sit down to eat your own iftar properly, because you’re too busy serving. So now that it’s scaled back and it’s just us, we get to spend more time enjoying that part.”

Time is pivotal when making Bosnian-style burek, for which pita or dough is meticulously filled with meat and rolled tightly into a swirled shape.

“You have to make the dough from scratch and, similar to pizza dough, you have to stretch it. But for the pita, you have to stretch it out really, really thin — to the point where you can see through it,” said Ahmetovic, who lives with her parents, sister and grandmother in Jefferson Park. “And then you line it with meat, cheese or potatoes, roll it over, and you do another line of filling and you keep rolling it.

“It’s really tasking. It’s about an hour process just for the dough to sit and stretch.”

The paper-thin, translucent pastry is one of the more complicated Bosnian recipes, but when making it becomes a family affair — as it so often is for Ahmetovic — the filling and folding is less daunting.

“I’ve made them with my mom, my sister, and my grandma, and it’s really fun, because they teach you the way they did it back home,” she said. Ahmetovic’s family immigrated to America from Bosnia nearly 21 years ago, and food has remained a constant link connecting them to their roots.

With a house full of working adults, making authentic Bosnian burek on typical weekdays before the pandemic could be a stretch (not just literally). So was preparing another time-consuming favorite, ćevapi — steamed beef sausages served with flatbread, onions and kefir. Homemade sogan dolma, a stuffed onion dish, is also likely to be on the Ahmetovic iftar spread more routinely this Ramadan.

“When life is normal, you don’t have time to spend two hours making pita,” Ahmetovic said with a laugh. “Working from home, overall, we’ve had more time in the morning for suhoor (the predawn breakfast) and, in the evenings, to prepare iftar. Instead of commuting and getting home at 6, now everyone’s done at 5. We close down the laptops and head to the kitchen.”

Being as it is another socially distanced Ramadan, which ends Wednesday, there are several elements missing from the usual Islamic month, including large iftar gatherings and communal prayers at the mosque. On the flip side, other traditions have become even more meaningful. And for a month largely spent not eating, it’s ironic how much of Ramadan is centered around food.

Deena Habbal, communications director at the Illinois Muslim Civic Coalition, alluded to the idea that Ramadan is deeply personal. Except for praying in a congregation or occasionally listening to the Quran as a group, everyone has a different journey, and it’s during iftar that family members and friends trickle out of their separate nooks and into the kitchen or outside for a picnic.

The idea that everyone is at once different but the same is what inspired her to start “Pass the Plate,” the coalition’s virtual campaign in which a broad range of Muslims in Illinois take over its Instagram account to share a day in their lives.

A Turkish woman walked viewers through her grocery store trip in preparation for iftar one day, and a Palestinian woman talked about traditions and cultural practices she and her Chilean husband share the next.

“We get a little snapshot of each other, and it normalizes us,” Habbal said.

One of the people passing the plate is Nadia Labadi, 29, whose multicultural family is keeping festivities close to home this year, but shaking things up a smidge.

“We didn’t want everything to be on my mom this Ramadan, because it’s just a lot, especially when you have grown adults who have been fasting all day,” Labadi said of her idea behind “rotating iftars.” Monday through Thursday, Labadi and her adult brothers and sisters-in-law take turns hosting a delectable breaking-of-the-fast meal with dishes from their family’s multitude of heritages and cuisines.

Labadi’s dad, Riad Labadi, is Palestinian; and her mom, Susan Labadi, a former assistant principal at the Islamic Foundation School in suburban Villa Park, is a Muslim convert.

“So we’re already like half-breeds, me and my three brothers,” Labadi said with a laugh. One of her brothers married a Filipino woman, and another married a Greek woman, who also converted to Islam. With everyone fully vaccinated, the family is gathering this year, although still in smaller numbers than before the pandemic.

Each weeknight, Labadi’s family rotates between their individual homes in Itasca, Lombard and Downers Grove. Dinners can include anything from homemade crab Rangoon to Filipino soup.

On the first iftar Labadi hosted, she made her favorite Palestinian dish, maqluba — meaning “upside down” in Arabic — which consists of layers of stewed lamb or chicken, rice and fried vegetables, cooked in a pot of aromatic spices and flipped onto a serving dish to form a steaming and impressive tower.

“I love making maqluba, but sometimes we might order in on our day, too,” Labadi said. “There are no rules, except that we see each other.”

According to the Illinois Muslim Civic Coalition, Illinois has the largest Muslim American population per capita in the country. Habbal’s hope is the diversity of the community becomes more and more evident.

“Nothing can replace being in person or being with the community, but we’re seeing that we’re still out there,” she said. “We’re all different, but we all break fast at the same time, and we’re all just doing our best to try to make this month special, even if we’re in a pandemic.”

Aside from cooking more than ever, both Labadi and Ahmetovic started decorating their homes to make it feel like a celebration, something they didn’t always do during past Ramadans.

“Party City was actually great this year; they had a large selection of Ramadan decorations, so we actually went to a few of them to find stuff, because some locations were sold out,” Ahmetovic said. Sprucing up the home with festive garlands and lights was important for Ahmetovic, who is hoping both the burek and the bedazzling will help fill the gaps necessitated by COVID-19.

Whether shutting down laptops from home or commuting back from work, the moments leading up to iftar are generally buzzing, cozy and comforting. There’s the click of the stove being turned on, the sizzling sound of batter hitting hot oil, the gentle chopping of fruits and veggies — the juncture of early evening prayers.

“Iftar really is the center of the day,” Ahmetovic said. “And what I’ve noticed about Ramadan during COVID is that you really get to internalize everything deeper ... from preparing food together, to the faith and the process of spending time understanding it. It has been really nice.”

This blueberry cobbler is a quick summer dessert and an excellent way to showcase fresh, bursting blueberries under a pillowy crust. Everything can be mixed and headed to the oven within 10 minutes.

Bread pudding has been traced the 11th and 12th centuries in England, as people baked this treat to use up leftover bread. Even in those times they were thinking about not wasting food! That said, bread puddings are ...Read More

If you’ve been searching for a recipe for creamy potato salad without mayonnaise, you’ve come to the right place. To make this salad creamy, I’ve used tahini paste.

Tahini paste is made from ground sesame seeds, ...Read More

One of my favorite annual traditions is making this super-simple flag cake with my daughter. Yes, turning a cake into an American flag is somewhat cliché, but if you consider this the best way to dress up berry shortcake ...Read More

My one requirement for the perfect beach day? A delicious packed sandwich that doesn’t get soggy. After a lot of trial and error, I’ve learned exactly what that is: a classic Italian sub. Nothing beats the layers of ...Read More