This bright, balanced Thai grilled-beef salad will be your new favorite summer salad 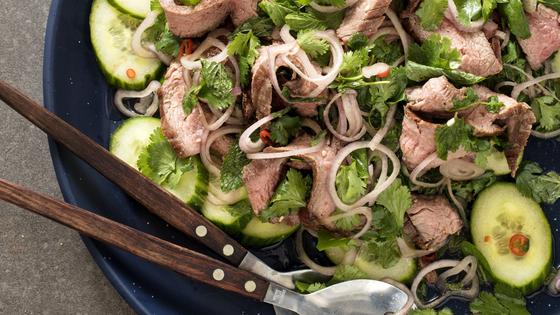 After testing a handful of cuts, we decided flank steak was the best choice for our version of this dish. After a few minutes over a modified two-level fire, this uniformly shaped, moderately priced cut was beefy and juicy, and it sliced neatly.

The name nam tok (literally “water falling”) refers to the beads of moisture that form on the surface of the steak as it cooks — an age-old Thai cookery clue that the meat is ready to be flipped. While this method sounded imprecise, we found it to be a surprisingly accurate gauge of when the flank steak is halfway done. Here’s why: As this steak’s interior gets hotter, its tightly packed fibers contract and release some of their interior moisture, which the fire’s heat then pushes to the meat’s surface. When turned at this point and cooked for an equal amount of time on the second side, the steak emerged deeply charred on the outside and medium-rare within.

For the dressing, we used a base of fish sauce, lime juice, sugar and water, and then added a Thai chile and a mix of toasted cayenne and paprika, which added earthy, fruity red pepper flavor. We also made our own toasted rice powder, a traditional ingredient in Thai grilled-beef salad recipes.

As for the vegetable components, we chose ones that complemented — but didn’t compete with — the grilled beef: The requisite mint and cilantro, plus a thin-sliced cucumber, which contributed a cool crispness to this nicely balanced, complexly flavored Thai classic.

This recipe is designed for peak-of­the­season, perfectly ripe tomatoes and peaches from your garden or a local farm. It’s perfect for heirloom fruits — a term used to describe varieties that can’t withstand the ...Read More

Cheesecake is delicious, but baking a big traditional one can be tricky. You have to bake a large cheesecake inside another pan filled with water to make sure it bakes evenly — a fussy and delicate maneuver in the oven. ...Read More

Looking for a sweet bite in the morning? Adding raspberries to your muffin batter yields a tasty bite the whole family will enjoy. And while you’re snacking on these delicious muffins, you can teach the kids some fun ...Read More

A summer treat that’s fun for kids and adults alike, paletas are easy to make and simply delicious. And while fresh fruit tastes best, you can use 1 pound of frozen strawberries, thawed and drained on paper towels, in ...Read More

This pretty, simple snack cake is a perfect way to use fresh summer produce! It’s also great for after school (or even for breakfast, if you’re in need of a special morning treat). The blueberries and raspberries add ...Read More