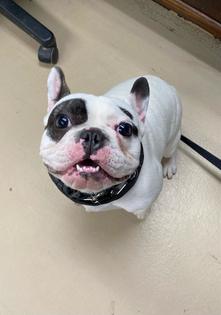 (UPI) An animal shelter in New York is seeking a home for a dog described as "a terror," a fire-breathing demon and a whole jerk.

The Niagara SPCA said 26-pound Ralphie has been adopted twice, but was returned twice due to his bad behavior.

"At first glance, he's an adorable highly sought after, young dog. People should be banging down our doors for him. We promise you, that won't be the case. Ralphie is a terror in a somewhat small package," the shelter said in a Facebook post.

The shelter said Ralphie's most recent owners took him home with the intention of training him.

"Two weeks into this new home and he was surrendered to us because [he] 'annoys our older dog.' What they actually meant was: Ralphie is a fire-breathing demon and will eat our dog," the post said.

"He's a whole jerk -- not even half. Everything belongs to him. If you dare test his ability to possess THE things, wrath will ensue. If you show a moment of weakness, prepare to be exploited," the shelter warned.

The SPCA said prospective owners who think they can handle training Ralphie should get in touch -- "if you're that crazy."

One important aspect of responsible dog ownership is ensuring your dog is comfortable and well-behaved around others. Socializing your puppy is crucial and should begin early on, as it sets your dog up to feel confident ...Read More

LOS ANGELES — Kilo, a muscular gray pit bull, stood staunchly by his homeless owner in the middle of 6th Street on L.A.'s skid row. His tongue lolled out, and his wide, square jaw was open as if he was grinning ear to ...Read More

(UPI) Animal rescuers in California said an 11-year-old Siberian husky mix was rescued from an oily mechanic's well on a resident's property.

(UPI) An Ohio dog named Spike has been certified as the oldest dog living by Guinness World Records after reaching 23 years, 43 days old.