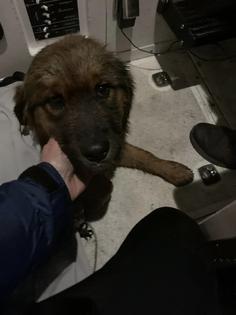 (UPI) A puppy that escaped from his owner in New York was seen entering the Hudson River and was later rescued when he was discovered hiding under a New Jersey pier.

Ellen Wolpin said Bear the puppy, who is in training to be a seizure service dog for her son, pulled free from his collar while she was walking him Saturday on the Upper West Side of Manhattan.

Bear ran about 30 blocks, to where witnesses saw the puppy entering the Hudson River. Days passed without any further sightings and Bear's owners feared the worst.

"We didn't think that he made it across," Wolpin told the New York Post.

It wasn't until just after midnight Tuesday that the Edgewater Fire Company in New Jersey responded to a report of barking underneath an Independence Harbor pier and ended up plucking a puppy out of the water.

The puppy was soon identified as the missing Bear thanks to a microchip. Bear was returned to his family.

"We were so happy," Wolpin said. This dog has had tons of treats and tons of hugs and we're just doing everything possible.