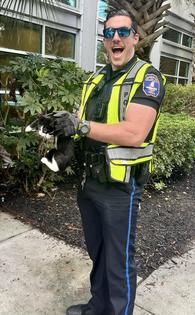 The Charleston Police Department said officers responded to the Arthur Ravenel Jr. Bridge, which spans the Cooper River on U.S. Route 17, when a kitten was reported dodging vehicles in traffic.

Officers were able to catch the kitten, which they nicknamed Officer Whiskers.

Police said the kitten would be examined by a veterinarian before being made available for adoption.

(UPI) Firefighters in Ohio came to the rescue of a man who got his leg stuck in the steel grate of a storm drain cover while attempting to rescue a cat.

(UPI) An outdoor showing of the film 101 Dalmatians in England broke a Guinness World Record when 127 dogs attended the film.

As fall begins, it’s important to note that your dog may require some post-summer care. From cracked paw pads to sun-bleached fur, it’s good to ensure that your pet gets the attention they need.

(UPI) A Florida firefighter rescuedf a kitten that became trapped in a storm drain while apparently trying to seek shelter from a storm.

LOS ANGELES — The 5-year-old dog named Bruce had already suffered by the time he was housed in a Los Angeles city kennel.

In May 2021, a bare-chested and barefoot man arrived at the South L.A. shelter with the brown and...Read More

After a summer together as a family, your dog has likely gotten used to your family’s company. But as back-to-school season begins, whether your child is going to school for the first time or going back to college, the...Read More