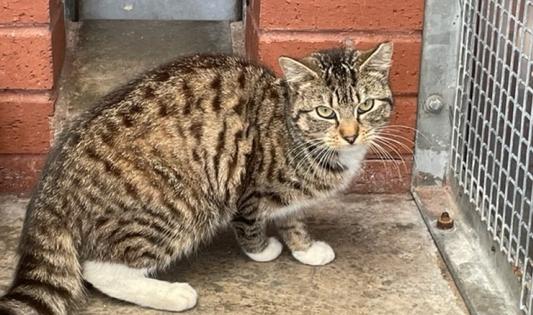 (UPI) Animal rescuers in Scotland said they are trying to solve the mystery of a cat that stowed away on a delivery truck -- and may have come from any of several locations in Scotland and England.

The Scottish SPCA said the cat, dubbed Maverick by rescuers, was brought to the rescue group after being found aboard a delivery truck.

Officials said they are trying to track down the feline's owner, but the situation is complicated because they don't know when the feline boarded the truck.

The truck started its journey in Barsley, England, and the vehicle then traveled to Scotland and stopped in North Berwick, Edinburgh, Kirkcaldy, Dundee, Perth and Glasgow before the cat was discovered in Bridge of Weir.

"There's no way to know which stop he got on the lorry at, he could have come from anywhere," Scottish SPCA Center Manager Judy Button said in the news release. Maverick is extremely nervous, so we have been unable to get close enough to locate a microchip.

The organization is appealing to the public to get into contact if they have information about the cat's origins.

"Thankfully Maverick is now safe at our center, but we are desperate to find his owner," she said.

(UPI) A Tennessee animal rescue group said a couple who brought in a kitten they found on their back deck were shocked to learn the animal was a baby bobcat.

(UPI) Hundreds of corgis and thousands of dog-loving humans gathered on a San Francisco beach for the first Corgi Con since the start of the COVID-19 pandemic.

With summertime comes beach days. With a little extra planning, your canine pals can join the summertime fun.

To ensure dog owners have the best beach experience possible with their pup friends, the American Kennel ...Read More