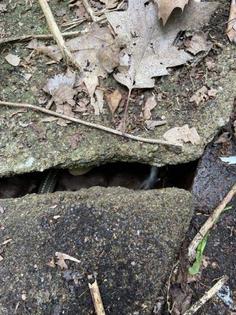 Pittsburgh Public Safely said in a Twitter post that the dog was reported missing on Friday and Animal Care & Control searched for the canine in the Swisshelm Park neighborhood.

The dog was located Wednesday when someone spotted the canine trapped beneath concrete slabs. It was unclear whether the slabs had fallen on the dog or if the animal had burrowed underneath the heavy objects.

Public safety officers used pry bars to lift the slabs and rescue the dog, which was returned to its owner.

(UPI) Authorities in Virginia rescued a kitten from a storm drain using a catch pole and a cellphone that lured the feline out by playing cat sounds.

(UPI) An adult Bengal tiger sparked fear and fascination in a Mexican city when it was seen wandering loose on a sidewalk in a residential area.

Dear Annie: My wife and I married four and a half years ago, the second marriage for both of us. I have had dogs virtually all of my life. My wife was aware of this. I brought three dogs into the marriage, and my wife was ...Read More

(UPI) Security cameras inside a Missouri home recorded the moment a dog turned on the kitchen stove, starting a fire that severely damaged the house.

June 24 is National Take Your Dog to Work Day! It can be really fun to introduce your dog to new places, and spending time in a new environment can get them used to new people, smells and experiences. Having a dog in the ...Read More

(UPI) Firefighters teamed up with other agencies in Odisha, India, to rescue a leopard that fell into a deep well and was unable to climb back out.