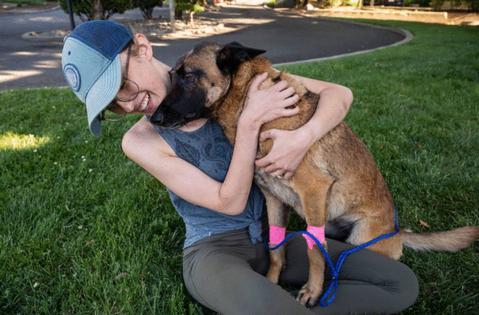 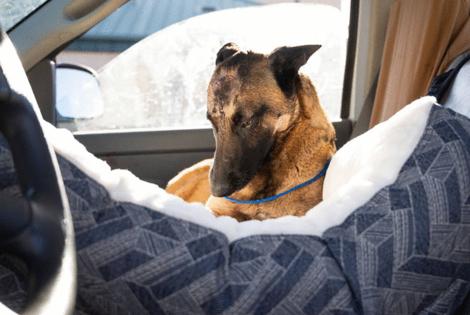 SACRAMENTO, Calif. — Eva, the dog credited for saving her owner’s life after she was attacked last month by a mountain lion in rural Northern California, died unexpectedly Wednesday morning.

In a brief interview by phone, Eva’s owner, Erin Wilson, said Eva, a 2 1/2-year-old Belgian Malinois, started getting wobbly and having seizures over the weekend at their home in Trinity County.

Wilson was told Eva needed special emergency care after rushing her to a Redding veterinarian.

Wilson took her to the animal hospital at the UC Davis School of Veterinary Medicine. There, Eva’s condition deteriorated to the point her veterinarians attempted to put her on a ventilator Wednesday morning.

Wilson said she and her fiance, Connor Kenny, were taking the dog’s body to Sacramento Wednesday morning.

“We’re bringing her to Connor’s parents to bury her in the yard,” Wilson said. “Because she really loved it there.”

“She’s resting in the dirt, looking over the pool she loved to play in,” she said. “She’s at peace. She won’t ever have to fight again.”

Eva’s sudden death came as a shock since she appeared to be doing so well after her May 16 battle with a mountain lion — a documented attack that became an international news story.

(UPI) A New Hampshire woman was reunited with her lost cat four years after the feline went missing.

The Salem Animal Rescue League said it was recently contacted by a woman who was preparing to leave the state and was ...Read More

(UPI) Firefighters in Britain came to the rescue of a cat that attempted to walk in the narrow gap between two brick buildings and got wedged trying to squeeze past a pipe.

Summer is upon us, which means many families will be making travel plans and taking trips with their furry friends. However you choose to travel, it’s important to take the time to prepare for a trip if traveling with ...Read More

SAN JOSE, Calif. -- Those adorable balls of fluff and feathers that were so irresistible at Easter can become a backyard chicken fancier’s worst nightmare when four months later, one starts crowing.

(UPI) Dozens of dogs rode on paddleboards for their owners at the Dog Paddle Surf race in Spain.

The event Sunday in El Masnou, north of Barcelona, required dogs to remain on the paddleboards at all times while their ...Read More

(UPI) Authorities in California said a mountain lion wandered into a high school Wednesday morning and was promptly locked inside a classroom by a custodian.