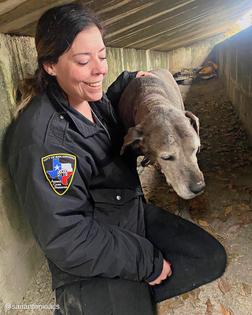 (UPI) Authorities in Texas came to the rescue of a dog that got trapped in a storm drain.

The City of San Antonio Animal Care Services said local residents reported the dog was spotted poking her head out from the concrete opening of a storm drain in the city.

"We're still not sure how this pretty lady wound up in the underground drainage system," ACS said in a Facebook post.

A team of four officers responded to the scene and, under the careful observation of bystanders and a pair of curious kittens, removed the heavy cover of the underground drainage system.

Officers were then able to climb into the storm drain and tie a rope around the dog so she could be lifted to safety.

The dog was taken to the ACS veterinary clinic, where she was found to be healthy and uninjured. Veterinarians identified the canine as a missing dog named Jupiter, and she was reunited with her family later in the same day.

Memorial Day is right around the corner, and the unofficial start of summer brings back outdoor barbecues. If you’re entertaining and want to have your pup around, there are some things worth noting before you start ...Read More

(UPI) A puppy who went missing from his New York home and was spotted dashing through two tunnels was rescued from a parking garage ledge at a Home Depot store in New Jersey.

It isn’t hard to empathize with that homeless Wisconsin woman who was undergoing chemotherapy and whose beloved dog, Baby Girl, had reportedly been turned away by an animal shelter when she tried to give her up. In a ...Read More

It’s finally warming up outside! With more opportunities to enjoy the weather and the summertime fast approaching, we are sure to spend time outdoor dining with our pups at pet-friendly restaurants.