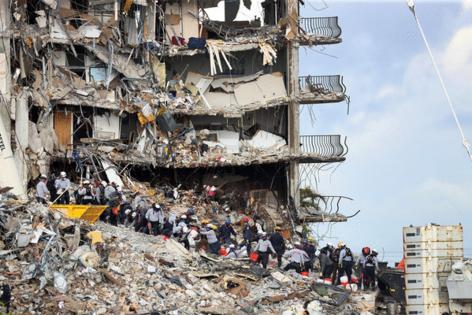 SURFSIDE, Fla. — In escaping the collapse of Sunrise's Champlain Towers South, some residents had to do what they never imagined they would do — left pets behind.

And, now that the rest of the apartment building will be demolished by Controlled Demolitions, Inc., residents are concerned about their pets.

"Many in the community have raised this concern," Miami-Dade Mayor Daniella Levine Cava said. "I want to be clear that search and rescue conducted three separate searches, a primary, a secondary and a tertiary. And, they found no animals. I was informed this morning that they did a sweep with cameras and found no animals at this time."

Firefighters got one fourth-floor family's dog, Rigatoni, out with the mother and daughter on June 24, in the first hours after the collapse. When someone saw their cat, Coco, on the balcony, firefighters used a cherry picker to leave food and water on the balcony.

But, as for going on a deeper search for pets, the same instability that requires the rest of the South tower's demolition makes a boots-on-the-ground pet hunt impractical.

"I've also been in touch with the contractor and provided locations of of animals that were given to me who might be in the building," Levine Cava said. "They are aware and doing everything they might do just to make an additional search. But I want to be very clear that they would not be doing that on site because they are not going to be able to go into those units.

"It is not safe for anyone to go beyond the first floor."

Levine Cava said, as a pet owner, she understands that many people consider pets family.

"I just want you to know that additional efforts have been made and are being made."

"Her compassion on that subject is appreciated," Burkett said. "While there are some who probably aren't as focused on that, she focuses on the little details .That's what makes her a great mayor."

DEAR JOAN — I live on the 11th floor of a building and I do not have a hummingbird feeder hanging from my window, but several of my neighbors do. Hummers fly up to my windows and look in on me, even though I don't feed ...Read More

Recently, I answered a question about a new puppy that was having trouble sleeping in his bed without whining and barking through the night. I suggested some crate-training tips, but I’ve had lots of emails from across ...Read More

(UPI) Police in New York conducted an unusual rescue when a resident called to report a kitten was trapped in the engine compartment of their vehicle.

(UPI) A 15-year-old dog that went missing from his owner's Florida home was reunited with the woman nearly a year later when she spotted his photo on an animal rescue's social media page.