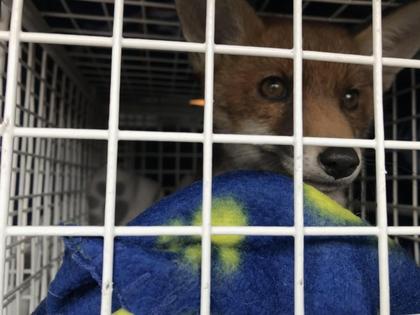 (UPI) Firefighters and animal rescuers in Britain came to the rescue of a young fox that fell into a storm tank at a sewage treatment plant and was unable to climb back out.

The RSPCA said inspector Grace Harris-Bridge responded alongside personnel from Kent Fire and Rescue Services when the fox was spotted about 30 feet down in the storm tank at Swalecliffe Treatment Works in Whitstable, England.

The fox was standing on a narrow ledge inside the tank without any means of climbing back out, the RSPCA said.

"This poor fox had got himself in a bit of a pickle, having fallen down into a storm tank at a sewage plant. Thankfully, someone spotted him and contacted us and we were able to climb down and catch the fox in the net after he tried to give us quite the run around," Harris-Bridge said.

"He was monitored overnight to make sure he was going to be OK and as he was in such good condition he was released back into the wild the next day," she said. I'd like to thank the fire and rescue services for their assistance with this rescue as well as the Fox Project who monitored and cared for him overnight.

As man’s best friend, dogs do everything with us: walk around town, ride in the car, play in the yard, and snuggle on the couch. It’s natural, then, given how much time we spend with our four-legged companions, to ...Read More

COLUMBUS, Ohio — As teachers pivoted to online learning last school year, some faced a unique challenge: What would happen to their class pets?

STERLING, Va. – For 17 years Derrick Campana has been gifting the disabled with a new lease on life with braces, prosthetics and engineered equipment. But Campana’s clients have four legs, not two. And he never planned...Read More

(UPI) A Connecticut woman making her morning commute captured video of an unusual sight on the highway -- a coyote running down the middle lane.

Tanika Campbell said she was on her way to her job in New Haven when she ...Read More

SAN FRANCISCO — A group of veterinarians and pet owners in California is asking the state to permit more telemedicine for animals even after the pandemic ends.

(UPI) Authorities in New Mexico worked together with a power company to rescue a bobcat seen stranded at the top of a utility pole.