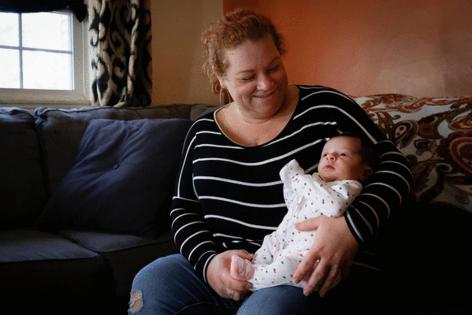 How is it possible for a 43-year-old woman to be sitting here in her living room holding a 1-month-old girl who came out of her womb — even though, just one month and one day ago, this same woman had no idea she’d been growing a tiny human inside of her?

We’re not talking about a preemie, either. We’re talking about a 7-pound, 20-inch-long infant, carried by Erin O’Malley of Charlotte, North Carolina, to a full-term, 40-week pregnancy.

All this in spite of the fact that, for most of her life, she believed she was unable to bear children.

“I really didn’t know,” Erin says, as the dark-brown-haired baby she named Lennox “Lenni” Mae cries up at her. Erin is reflecting on the blindsiding news she received on the morning of Oct. 12, roughly 18 hours before she gave birth via emergency C-section at Novant Health Matthews Medical Center. And, since she seems to feel like those four words are hard for others to swallow, she repeats them.

“I really didn’t know. I definitely was not trying to hide it in any kind of way. So it’s not like I was trying to keep it a secret so nobody knew — you know, I’m not a teenager. I’m relatively intelligent. I can accept a lot of things in my life,” she says, chuckling. “I just did not know. In any way.”

Which, once more, begs the question: How?

‘This is what you were meant to do’

Her younger sister, Amber Mengering, says Erin was born to be a mother.

As the oldest Mengering sibling, Erin helped take care of her two younger sisters and her younger brother for years. But also, Amber says, Erin “pretty much helped to raise every cousin, niece, nephew ... because she’s the oldest grandchild in our family. ... She helped with everybody. And she has been babysitting since she was 6 or 7 years old. So she’s always been a carer, taking care of others.”

What it’s about: Two teenage cannibals connect in the 1980s Midwest for a ...Read More

The first-grader attends Gladwyne Elementary in the Lower Merion School District (LMSD), which has seen an unusually ...Read More

Rated R for strong/disturbing violent content, language throughout and some sexual references.

What it’s about: A black satire set in the world of high-end dining, in which a celebrity chef assembles a ...Read More

Why did turkey become the national Thanksgiving go-to ...Read More

Rated PG-13 for sequences of strong violence, action and some language.

What it’s about: The sequel to "Black Panther" takes on the world without T'Challa, and Chadwick Boseman, ...Read More

The aphorism “birds of a feather flock together” describes the fact that people tend to prefer associating with others who are similar to themselves. The phenomenon goes by different names: Sociologists call it ...Read More