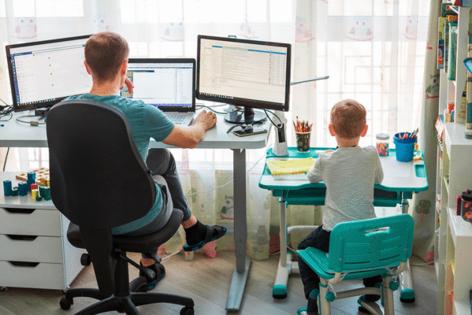 When the pandemic disrupted everything, it also thrust fathers into the home like never before. It was a moment that looked like it could bring some relief to working moms. Dads had the flexibility – and the desire – to take on more responsibility. Then, the world got in the way.

Back in 2020, while Lindsey Jackson and her husband Clarence were both stuck working from home, they were splitting household chores and child care for their two-year-old son just about evenly. But now that Clarence, a financial advisor at JPMorgan Chase & Co., is going back to the office and Lindsey isn't, things are shifting to mean Lindsey is taking on more. She’s so busy she has to cook and bathe her son at the same time.

“It's just much more responsibility on her for caring for him,” Clarence said.

The pandemic, over time, has worsened some gender inequalities in American homes. Both moms and dads spent more time looking after their kids as schools went virtual and day cares shut down. But mothers bore the brunt of that. In 2020, women devoted 2.9 hours more per day than men to child care, compared with 2.55 in 2019, Bureau of Labor Statistics data compiled by Bloomberg News show. The disproportionate burden on mothers ends up eating into their earnings.

“We're reverting back into our traditional gender norms,” said Misty Heggeness, principal economist at the U.S. Census Bureau. “It's women, particularly mothers, who are still bearing the heavy lift disproportionately.”

A child-care crisis has driven a workforce gender gap for decades, but the pandemic took things to another level, costing women globally at least $800 billion in lost income in 2020, according to Oxfam. In the U.S., roughly 20% of the 7.1 million women aged 25 to 54 that left the labor force during the onset of COVID recession haven’t returned to work as moms struggle to find affordable care. Meanwhile, industries that employ a large number of women – education, health care and food – are seeing some of the worst impacts of the current labor shortages.

The twist here is that being thrust into the home made many dads more willing to take on added responsibilities, which could go a long way in helping to close the gender pay gap.

For the Jackson family, when Clarence started working remotely, it made “home-making chores more obvious,” pushing the couple closer to a 50-50 split, Lindsey said.

As the world opened back up, dads ran into bigger problems than their own willingness to pitch in.

PITTSBURGH — Last Thanksgiving, Bev Gunnarsson and her husband followed public health recommendations and stayed home in Fox Chapel, Pennsylvania, for Thanksgiving rather than traveling to the New York area to visit ...Read More

LOS ANGELES — Every Nov. 1, I engage in an unusual ritual. As soon as the Halloween decorations are down, I unleash a turkey on L.A. — and the world. Not a live bird but a gravy-colored knit chullo (a.k.a. an Andean ...Read More

"We are a little bit on edge at this ...Read More

For many families, this Thanksgiving will represent a return to normalcy, thanks to COVID-19 vaccines.

But for some parents, the holiday presents yet another dilemma: Should they gather with friends and family, given that...Read More

In a sense, that’s true, albeit this mom’s definition of respect hardly lines up with that of said ...Read More