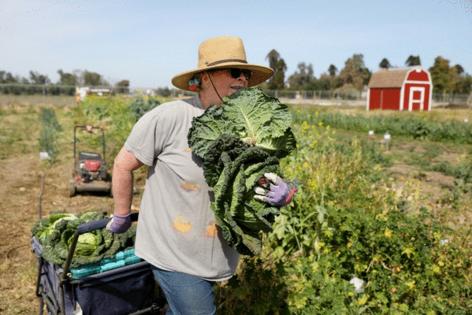 Her friend Liza Apper had told her that joy and grief could exist together. She thought this must have been what Apper meant: a flash of being alive, even as she grieved for Rodney Wells.

She and Rodney — who died in December of a heart attack so sudden that he never cried out — had tried to make it as organic farmers. But they lost money every year. They decided that if they were going to pay to farm, it should be only a labor of love. In 2016, they sold the farm and in their yard started growing organic produce to give to people who couldn't afford fresh food.

They grew in planters in the front and back of their house on Huntington Boulevard, a stately street blocks from a troubled urban core. They chose the neighborhood because of its diversity, including other interracial couples such as Sherril, who is white, and Rodney, who was Black.

Next to their driveway, they flew an American flag from a tall pole because of Rodney's military background and because he did not want to cede its symbolism to racists. They expanded to a plot at the African American Farmers of California's demonstration farm behind Kearney Park on Fresno's west side.

After Rodney's death, there were days when Sherril wished that she had died too. But she was determined to keep growing food to give away.

During the week, she worked as a judicial attorney with the Superior Court. On weekends, she worked at the farm and found solace where she could smell dirt, hear the bees buzzing in the nettles and get scolded by jays nesting in the oleander windbreak.

Maybe it was because Rodney had loved the place. He was a retired command master chief, the highest noncommissioned rank in the Navy. (If someone called him "sir," he always said, "No thanks, I work for a living.")

Will Scott, who founded the Black farmers group, was a retired submarine engineer, and there were Pete and Ken and Bill, all Vietnam veterans. They liked to walk the rows and make jokes that only they would get.

But Rodney's best friend was probably Carlos Luna, quietly weeding a few rows away. Sherril thought Luna came only on the weekends, which she had hired him to do. What she didn't know was that Luna also came during the week on his way to his job at a farm and manufacturing plant. He checked the irrigation and fixed anything that needed to be fixed.

For three decades, I knew my mother-in-law as a strong woman with very sharp edges. She was highly opinionated and blunt — sometimes excessively so. Her words could bruise if you let them.

She rarely paused to edit her ...Read More