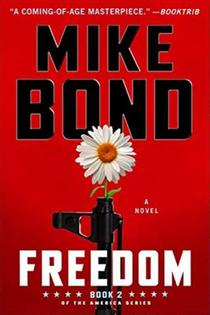 We didn’t start the fire

No, we didn’t light it, but we tried to fight it …

Firmly rooted in fact and history, "Freedom" (Big City Press) is highly readable, bitterly nostalgic, romantic, a little heartbreaking and surprisingly edifying. In this book, the second in a series about our nation in the 1960s, Mike Bond continues the conjoined sagas of the four young people he introduced in his previous novel, "America." They’ve all gone their separate ways, each reacting to the political chaos of the country and the new set of moral codes as best he or she can.

Biological siblings Mick and Tara have lost touch. Mick has been traveling the world climbing mountains and body surfing, fearless and free, until he stumbles into a bloody coup on an island in Indonesia. Tara stumbles into a personal mess of her own: her growing fame as a rock star brings with it pressure she cannot handle without the wrong kind of help.

Their adopted brother Troy has found a satisfying niche for himself in the army, and when he is deployed to Vietnam, the jungle canopy seems to him like a vaulted cathedral. “I could live here,” he tells himself. Young Daisy Moran, Mick’s high school flame, has joined the Peace Corps and feels productive teaching school in a blisteringly hot third-world country.

Characters with the weight of the world on their shoulders

Each of these characters could carry a novel on his or her own, but Bond has done a fine job of telling all of their stories, first one and then another and another and back again, without losing momentum. And like the kids of the ‘60s, he quotes the haunting songs of Jim Morrison, Phil Ochs, Tom Paxton, Bob Dylan and Peter, Paul and Mary; thus the narrative is underpinned with those unforgettable anti-war lyrics, the taunting notes of sex and drug experimentation. The characters quote Marx, Dos Passos, Camus, Voltaire and Pascal. These are educated and tormented young people searching for answers; or at least calm.

Mick throws himself into danger and gunfire, mindless sexual encounters and cheap booze. Although Troy is the one fighting in Vietnam, readers may find themselves worried more about Mick’s survival … and Tara’s.

What makes "Freedom" such a memorable read may be Bond’s wonderful, almost playful, talent with words. “The engine roared like a maddened sewing machine,” for example, or “cars slept like bears along the curb.”

A complete picture of a changing world

And then there’s this arresting passage: “Draino came in, a skinny guy with an ineffective little moustache and a balding Afro. He was a street runner like Johnny, but far more gone, a walking addiction whose existence focused solely on acquiring and injecting smack. His name came from his tendency to mix that product into his bags to stretch some extra for himself. At all hours people staggered in and out; there was loud angry talk about Whitey and the War, or smack deals with shivering dancy young men. Draino wandered like a blind albatross seeking some chemical clue far back in his brain. Hookers were working downstairs and some of their tricks didn’t like white boys. Twice when guys tried to hold Mick up with knives he outran them, but worried about the ones with guns.”

"Freedom" is a testament to the effect the politics and moral revolution have had on America, how what happened then created what we are now. Timothy Leary preached, Detroit burned and the verdant jungles of a tropical country were poisoned. Although "Freedom" can stand on its own, readers may find themselves eager for the next book in the series but also heading to the local bookstore to get "America." All in all, as Mick’s friend says, “the revolution starts here.”