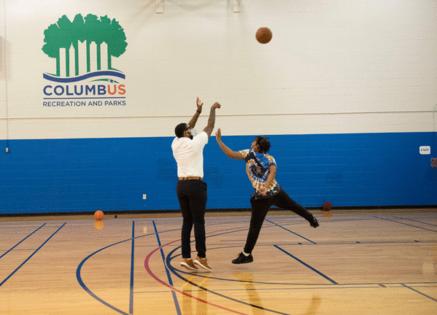 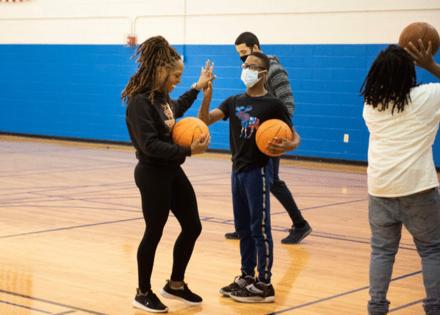 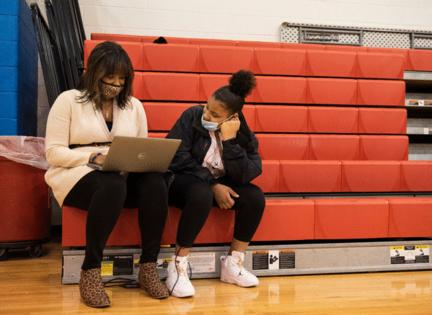 Kevin Kennedy noticed that Damari and the other teens and tweens sitting around the folding tables in one of the classrooms at the Woodward Park Community Center seemed restless. So the team leader with the local nonprofit Actions that Matter for Youth decided homework time was over.

"Come on. You know what to do," Kennedy told the half dozen kids who had gathered here after walking over from Woodward Middle School next door. "Grab a pen and write it down — a personal goal and an academic goal."

Damari snatched up a marker and, on the paper covering the tables, wrote in neat and flourished handwriting that seemed atypical of a 13-year-old who's always in a rush, "Get successful/get rich. Provide for my family."

Kennedy, as he walked around and surveyed the responses, explained the exercise: "Writing is easier. Talking out loud about personal things is hard."

Damari is one of 15 seventh- and eighth-graders from the middle school who spend three hours after class four nights a week at the community center as part of a pilot program aimed at keeping them focused, engaged and on track.

"Being here makes me want to do my homework," Damari said. "I'm trying to get all As this year."

This afterschool program is an extension of work that goes on during the day at the school, said DeAndra Harrison, the founder of Actions that Matter for Youth. The organization received $30,000 in American Rescue Plan funds from the city of Columbus to run this pilot program in tandem at Woodward Park Middle School and the community center, which are on Karl Road in the heart of the Northland neighborhood.

At school, the focus is on social/emotional/life skills and academics and, the afterschool program adds in recreation and homework components. Between the two sites, about 50 to 60 students are participating.

The heart of the program, Harrison said, is mentoring.

"We're building trust and long-term relationships. It's about building up the students as a whole person," Harrison said. "Middle school is such a key age and a tough time. But everyone is really seen as equal here."

The way she sees it, afterschool programs such as this one are among the most impactful activities the center can provide.

Cordi grew up here in Northland and watched as the community center was built in 1976. In her 30 years with the city of Columbus Recreation and Parks Department, she has worked at several community centers, including Douglas in South Linden, Dodge in Franklinton and Schiller in German Village.

But now she runs the programs back in the neighborhood where she grew up, a neighborhood whose makeup had dramatically changed: Recent census figures show the number of minority residents grew by 45% in the 18 census tracts roughly bounded by Interstate 270 on the north and east, Morse Road on the south, and the Worthington city limits on the west. Approximately 62,000 out of 97,000 people in the area belong to minority groups.

Cordi said the diversity has enriched the area for everyone.

"This is like coming home for me," she said. "And it made me more committed to making these kids our future leaders."

During its busiest months, Woodward Community Center sees as many as 10,000 visitors. It's youth basketball program is a favorite of residents, with about 250 participating.

But Cordi said that as she has watched the violence escalate in Columbus over the past couple of years, she found herself wondering how she could help more. She decided she had to find a way to get more teens to spend time at the center. And this pilot program is one solution.

"We have to build relationships with them now and get to know them," Cordi said. "It's about respect. We respect them, and they respect us."

Not long after she said that, a spindly 12-year-old burst through the gym doors and made a beeline for her.

Attendance at school and this program is tracked, and Eddie Scott had told Miss Chris — as the kids all call her — that he wouldn't be there this day because he had an orthodontist appointment.

He tugged down his mask and grinned.

"There's still braces! I thought you were getting them off," Cordi said.

"Nah, not yet," said Eddie, a seventh-grader, before running off to join a game of hoops.

Later, he said that he and his older siblings have been coming to the center as long as he can remember. This afterschool program, he said, has been helpful.

"It gives me to time to get my homework done," he said. "But I also make sure things are good around here. I sweep the floors and take care of things."

"He'd already said he wasn't going to be here today," she said. "He could have just gone home. But he didn't. I feel like we're all family here."

That might be the closest one comes to describing and understanding Trey Ciuri, the protagonist in John Peter Fer’s complex, far-reaching novel "A Fool and A...Read More