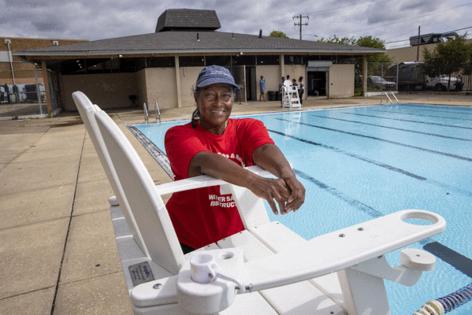 PHILADELPHIA — Meet Thelma Nesbitt, a water safety instructor with Philadelphia's Parks and Recreation Department by day and a nursing home nurse by night.

— Moonlighting poolside: "Nursing is very stressful. My coworkers there are like 'You're going to another job?' and I'm like 'Oh yes, I'm going to de-stress, I'm going to jump in the water."

— On guarding the guards: "First-year guards will say 'I had 10 saves!' and I say 'What is wrong with this picture? Lifeguarding is about prevention, so if you're jumping in the water to save someone, what was you not doing?'"

When Thelma Nesbitt was injured in a car accident in 1988, her doctor suggested she take up swimming as part of her physical therapy.

But of all the activities Nesbitt learned growing up as a kid in West Philly, from ballet to ice skating, swimming was not among them.

So Nesbitt, then in her mid-20s, went to the city's Sayre Morris Recreation Center in West Philly, where water safety instructors at the pool taught her how to swim for free (a service the city still offers today).

"I had some really good instructors," she said. "They told me 'You need to get into lifeguarding.'"

Hesitant at first, Nesbitt took their advice and in 1990, she became a lifeguard at Sayre, the very pool she'd learned to swim at two years prior. In 1993, she was promoted to the position of water safety instructor at Carousel House in West Philly, then the city's only recreation center for people with disabilities.

Today, Nesbitt is the longest-tenured water safety instructor in Philadelphia's Parks and Recreation Department, where, like "David Hasselhoff in Baywatch," she trains and manages the city's hundreds of lifeguards, according to Parks and Rec spokesperson Maita Soukup. Nesbitt also teaches swim lessons and swim camps, inspects city pools, keeps staff hydrated, and steps up to stand guard in the tall white chair when staffing is short. She even fixes the occasional pair of goggles when called upon by young swimmers.

From 11 p.m. to 7 a.m., Nesbitt, 60, works as an overnight nurse at the rehab unit of local nursing home. She's not sure where she gets her energy, but thinks it may have come from raising five kids, all of whom worked as lifeguards at city pools.

"I can't remember a water safety instructor who didn't have their kids work at a city pool at 16," she said. "First, they learn responsibility. Second, I need them to get out of my pocket. They be making good money. You want these expensive sneakers, work for it."

This year, Nesbitt's 15-year-old grandson, Cameron Tilghman, took the lifeguard training course — the first of her 10 grandkids to do so. While he can't lifeguard at a city pool until he's 16, Tilghman wanted to prepare for next season.

"It's family tradition," he said.

Nesbitt, a no-nonsense woman who taught her kids how to swim in 12 feet of water when they were 3 years old, said the most important training she imparts to lifeguards involves CPR and spinal cord injuries, but the most important lessons are about vigilance and taking charge in tough situations.

"I tell them everybody responds to emergencies differently. There's the flight mode and fight mode, and you never know which one you're going to be until you're in it," she said. "But if you come across that situation, I want you to be comfortable and prepared, even if you have to get your little sister's teddy bear and practice CPR on it."

This season, Nesbitt and the city's five other water safety instructors trained 224 lifeguards, ranging in age from 16 to 71.

"You're never too old to learn, or to become a lifeguard," she said.

But amid a nationwide shortage of lifeguards due to COVID-19, the city fell well short of recruiting the more than 400 lifeguards needed to operate all 69 of its pools. As a result, only 47 pools were opened in Philly this year.

"It made it difficult for the citizens of Philadelphia," Nesbitt said. "Where we had access to so many pools in the neighborhood, now these children would have to walk further to get to a pool to cool down... and you have to think about if they're safe going into another area of the city."

Nesbitt also worries about the people she used to work with at Carousel House. The city announced the closure of its only recreation center for people with disabilities earlier this year, which resulted in a public outcry and protest, but officials promised a new rec center being built on the site will include many of the same programs. Nesbitt said it was at Carousel's pool, which was heated and had a hydraulic lift, where she saw the transformative power water can have.

"Certain people would come through Carousel House who were losing their ability to walk, but when they got in the water and put a life jacket on, they were able to walk around in the world again," she said. "It was really rewarding."

Last year, when city pools closed during the pandemic, Nesbitt took on a variety of roles for the Parks and Rec department, from packaging food for giveaways to handing out face masks at Wissahickon Valley Park.

"It was really fun and interesting," she said. "I got to meet a whole lot of different people and they appreciated it."

But for Nesbitt, nothing compares to the satisfaction she gets from helping people feel comfortable in the water.

"When you're watching a child, or even an adult, who's just jumping up and down and then you start teaching them little things, and they can go a little further and a little further, it's amazing," she said. "It's very rewarding to see people become happy in the water."

COLUMBUS, Ohio – Mikey Heine wasn't going to be able to keep attending Bridgeway Academy in Columbus, Ohio, a school that has helped him grow and develop his own sense of self.

"We were looking at withdrawing Mikey from...Read More

Is your child OK?

It's a question parents, guardians and loved ones who care for their kids ask themselves every day. But sometimes it's hard to tell when children are in emotional distress.

"Mom’s Perfect Boyfriend" (Galbadia Press) is more than a typical romance novel: it’s futuristic. Author Crystal Hemmingway imagines a near-future in which robots may be more than the machines we know — they could be...Read More

One good way to keep grandkids coming around is to keep cool toys around. Not expensive toys, necessarily, but interesting ones like parachutes, butterfly nets, ride toys with obnoxious sirens and horns, plastic bats and a...Read More

At night when I can’t sleep — which is a lot lately — I turn to recorded sounds of the sea, to rain pitter-pattering on leaves, and especially to the voices of seasoned gurus.

In the case of the wise people, it’s ...Read More

RIVERVIEW, Fla. — As the mother of two children with special needs, María "Lalita" Tooley had to be creative to overcome the worries of the first months of the pandemic. The purpose was not to be left adrift, she said. ...Read More