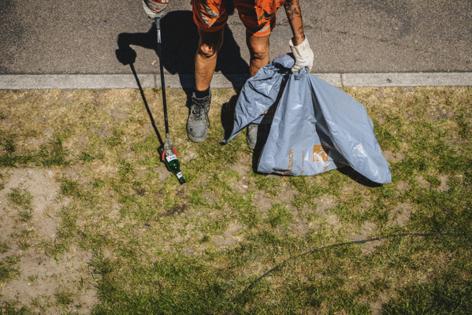 One good way to keep grandkids coming around is to keep cool toys around. Not expensive toys, necessarily, but interesting ones like parachutes, butterfly nets, ride toys with obnoxious sirens and horns, plastic bats and a thousand plastic balls, old buckets, assorted sizes of rakes and snow shovels, galvanized tubs and a nine-setting nozzle for the garden hose.

That said, there are times you should drop some hard, cold cash. On grabbers.

For the uninitiated, a grabber is a hollow aluminum rod about 3 feet long with a jaw-shaped contraption on the end that you open and close by squeezing a lever on the handle. Grabbers enable grabees to grab things out of reach — cookies on a high shelf, interesting things on stacks of boxes in the garage, your cousin's leg, your cousin's arm and your grandpa's hat right off his head.

Our two grandsons were with us for a short weekend and noticed shiny new grabbers hanging in the garage. They immediately inspected them and demonstrated how to adjust the angle of the jaws. We'd never noticed that before and probably never would have.

There wasn't much (or many) to grab in the backyard, so we suggested branching out. We asked if they'd like to pick up trash. They were ecstatic. Their thought process probably went like this: "If they take us to pick trash this time, maybe they'll take us dumpster diving next time."

We grabbed plastic gloves, buckets, a 30-gallon trash bag and headed to a neighborhood strip mall known for lackluster maintenance.

I told the boys we were putting the broken window theory into practice. Their eyes grew huge. Grandma was talking trash only moments ago. Now she's talking broken windows.

Our destination did not disappoint. Stores, a gas station and bus stop all provided a hodgepodge of finds. Big plastic cups, empty soda cans, beer cans, tiny liquor bottles and disposable coffee cups with lids and stir sticks accounted for the greatest amount of trash.

The problem with "disposable cups" is a lot of people take it to mean right where they are at the moment.

Tobacco products and masks were the second most frequently found items. Empty bags from the big three of fast food nutrients — crackers, cookies and chips — made an excellent showing as well.

The best find of the afternoon? A smashed car bumper.

Although it was productive couple of hours, albeit gross and smelly, nobody wants to go back soon.

For a whole two days.

At night when I can’t sleep — which is a lot lately — I turn to recorded sounds of the sea, to rain pitter-pattering on leaves, and especially to the voices of seasoned gurus.

In the case of the wise people, it’s ...Read More

RIVERVIEW, Fla. — As the mother of two children with special needs, María "Lalita" Tooley had to be creative to overcome the worries of the first months of the pandemic. The purpose was not to be left adrift, she said. ...Read More

BALTIMORE – Four-year-old Daniel Smith zoomed by, seated on a child-sized zip line, his dark curls bouncing. Daniel flew until he was above the cushiony crash pit. Off Daniel tumbled into the pillows, with a delighted ...Read More

The Sacramento Bee checked in with Dr. Dean Blumberg, chief of pediatric infectious disease at UC Davis Children's Hospital, to identify ways students and staff can remain safe and healthy on school campus.

Students will be under all manner of pandemic-related stresses as they hit classrooms for the new school year, but there is a lot of help available to make the transition back to school easier.

After returning from the state fair, I'm not sure if I should pop into a Catholic Church and make a confession or create an online account for Weight Watchers.