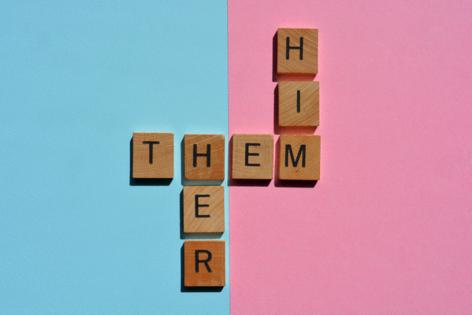 Dear Mr. Dad: A few years ago, a friend sent me a column of yours that dealt with the issue of gender identity and sexual orientation and pronouns. I didn’t pay much attention to it then, but everyone at my office is now announcing their “preferred pronouns” in their email signatures and my own daughter now says she’s nonbinary and wants to be referred to as “they.” As I remember, the child in your column offered to help his/their parents understand. But my daughter flat out won’t talk to us. Can you help us make sense of this new terrain?

A: At the time I wrote that column, I mentioned how my “daughter” had taken a class that covered gender vs. sex in high school and had spent a lot of time talking with me about those issues.

Since then, that child has identified as nonbinary and like yours, prefers they/them pronouns. I’ll spend the rest of this column reviewing the important distinctions between the words “gender” and “sex,” but I strongly suggest you sit down with your child and ask them — yes, “them,” not “her,” since that’s the pronoun they want you to use — as many questions as you have. They may be reluctant at first, but your genuine desire to learn — and not to snicker or judge — should win them over.

Let’s start with gender and sex. A lot of people use the two words interchangeably, but there are some important differences.

“Sex” refers to the anatomical organs a person is born with (sometimes referred to as “assigned at birth.”) A person’s “gender,” however, refers to social roles and behaviors. As my child put it, sex is between your legs; gender is between your ears. It’s a little subtler than that, but that’s a good summary.

The difference between sexual orientation and gender identity is similar, but also a lot more complicated. Sexual orientation refers to the type of person one is romantically or sexually attracted to. Someone who’s attracted to people of the opposite sex are “straight,” or “heterosexual,” while those attracted to people of the same sex are “gay” or “homosexual.” “Bisexual” refers to people who are attracted to more than one gender. “Pansexual” refers to attraction regardless of gender. Is your head spinning yet? Mine sure was when I first started learning about this. Don’t worry. It gets easier with time.

One’s gender identity refers to how a person feels inside, male, female, neither or both. “Cisgender” (from the Latin for “on this side of” or “near”) is the term used to describe someone whose gender identity matches his or her sex. In other words, a person assigned male at birth who identifies as a boy or man or a person assigned female at birth who identifies as a girl or woman. People who feel as if they were born into the wrong body may describe themselves as “transgender,” “gender-nonconforming,” “nonbinary” or “genderqueer.” Some people may identify as “gender fluid,” meaning they feel like a different gender at different times.

The more you learn about sex and gender, the better you’ll feel — and the more supported your child will feel. Again, take them up on their offer to discuss. Be patient. You’re all at the very early stages of a long journey and you’ll need to have more than one talk — probably a lot more than one. In the meantime, you may also want to check out a few resources, including Diane Ehrensaft’s book, “The Gender Creative Child,” GenderSpectrum (https://www.genderspectrum.org), and Trans Student Educational Resources (http://www.transstudent.org/gender).

Q. My children’s father has a very bad temper. Over the years my kids have asked me, “Don’t to tell Dad,” for fear he would get angry. I have kept a few minor things in confidence, but now my 15-year-old daughter ...Read More

Q. After three years together, my ex and I broke up four months ago. I was so mad that I didn’t take anything except my car, which was mine before I moved in. He still lives in the house, has my sofa and has all my pots ...Read More

Q. I had a miserable 10 years with my ex. We tried counseling, but my ex stopped it when things got too close for comfort. I am convinced she is a narcissist. She checks all the boxes. Would this be enough of a reason to ...Read More