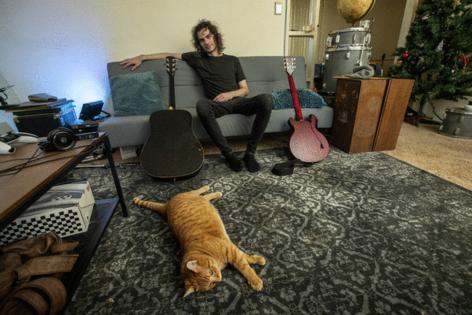 When Santa Monica resident Rob Leonard got a notice telling him that rent for his one-bedroom apartment would go up $100 a month starting in September, he had to read the letter several times because he thought there was a mistake.

"I was in shock," he said. "Twelve hundred dollars a year — that's people's grocery money. That's gas. I have a cat, so that's cat food, cat litter, or one vet visit could amount to $1,200. I generally live within my means, but it just means I'm going to have to work even harder and grind more."

Leonard moved to the beachfront city in June 2013 from South L.A. and started out paying $1,450 a month. His rent has gone up slightly every year, but the latest hike — a new monthly payment of $1,764 — is the largest bump in nine years.

"At the time, I was like, this is more expensive than I'm used to, but now that I look back, I can't afford to move out anywhere else," he said. "Even in (Koreatown), the rent is crazy high compared to what I'm paying at my place."

Of the most expensive places for renters in the U.S., three California cities are in the top five, according to a recent report by the listing portal Rent. But they aren't where you'd expect.

After Jersey City, N.J., and Boston, Palo Alto is the third-most-expensive city for rentals in the United States, followed by Glendale and Santa Monica. San Diego is ninth on the list, while Newport Beach came in at 10th. Los Angeles and San Francisco are in the next tier, at 12th and 13th, respectively.

The list was compiled from data from Rent's multifamily rental property inventory for one- or two-bedroom units between June 2021 and June 2022. The data capture only the company's own listings, not totals for the overall rental markets, which are likely lower. Yet the findings have generated notice and underscore the growing housing affordability crisis.

At the height of the pandemic, as people relocated from major cities, rental prices dipped everywhere, according to Jon Leckie, a data journalist for Rent. The rental market stayed depressed for about a year before experiencing a steep rise around August or September 2021.

"At one point in the middle of the pandemic, Oakland overtook San Francisco in average rent prices," Leckie said. "That shows that people said, 'Let's get out of the city center into something that's not too far away.' You could still go to the office, but you're far enough away that you get away from the city center and don't have to deal with crowds of people."

Data from the Bureau of Labor Statistics' consumer price index for the Los Angeles area showed that in April, housing costs were up 5.4% from the year before and renters were spending 3.7% more for their primary residence compared with April 2021.