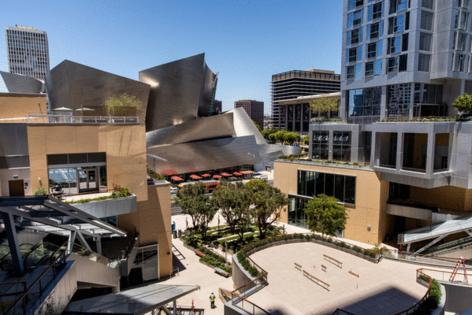 As his latest Los Angeles mega-project neared completion, Frank Gehry was offered an apartment with sweeping views high up in the 45-story Grand LA complex he designed on Bunker Hill in Downtown. He chose instead one of the development's lowest units — an apartment that looks out on his famous Walt Disney Concert Hall across the street.

The lower view will let the architect see how his two creations complement each other.

"Now Disney has context," he said on a balcony overlooking the home of the Los Angeles Philharmonic. "For me, it all fits now. Disney Hall doesn't look like an outlier."

The existence of the Grand may come as a surprise to those who stayed away from downtown during the pandemic and have yet to return to their offices or Bunker Hill's art and entertainment venues such as the Dorothy Chandler Pavilion, Ahmanson Theatre and Broad Museum.

Work on the Grand started in late 2018. The project will hit a pivotal milestone in July with the opening of the apartment tower and the 28-story Conrad Los Angeles hotel. The Grand's expansive shopping and dining component that will include outdoor decks overlooking Disney Concert Hall won't be done until next year.

Canadian-born Gehry, 93, is known around the world for what Architectural Digest called masterful whimsical designs, such as the Olympic Fish Pavilion in Barcelona, Spain, and the so-called Binoculars Building in the Venice neighborhood of L.A. Other fluid creations include the Guggenheim Museum Bilbao in Spain and the "Dancing House" commercial building in the Czech Republic.

The Grand is one of his largest local commissions, and its commercial scale is a source of pride.

"Most developers don't think of an architect that does that," he said, pointing to Disney Hall, "as an architect who can do this. They pigeonhole you as the artsy guy."

Related Cos. — the New York developer behind large-scale projects including New York's Hudson Yards and the Century condominium high-rise in Century City — was able to erect the Grand after years of efforts to arrange financing for the project while working through a lengthy design process with Gehry.

He proposed multiple versions of the Grand, including some details that Related liked that Gehry later rejected.

Needing places to either work from temporarily or vacation as they escaped pandemic restrictions, COVID fleers made South Florida one of their top destinations.

And with them came an increased need for short-term housing,...Read More

Q: My neighbor and I had a falling out, after which he set up a bright flood light that points directly into my home. I cannot keep the blinds open on an entire side of my house. He also harassed me in other ways, such as ...Read More

One year ago, after working for more than a decade ...Read More