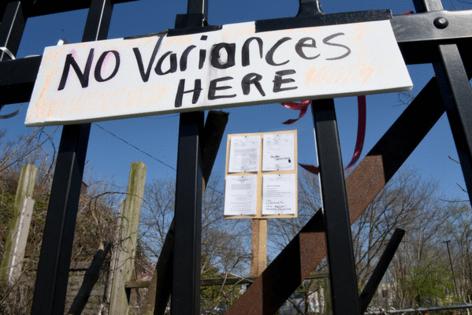 Neighbors who oppose the construction of an apartment building in West Philadelphia and had asked residents for fecal samples to try to find a link between development and colorectal cancer won their appeal Monday of the zoning board's approval of the project.

A Philadelphia Common Pleas Court judge ruled that the city's zoning board had failed to provide evidence to support its conclusion that the property owner faced a hardship in developing his property at 48th Street and Chester Avenue that would justify zoning exceptions that the city granted in June.

Judge Anne Marie B. Coyle said the Zoning Board of Adjustment lacked enough information to make a decision either way, and she ordered the board to reexamine the proposal for the 76-unit apartment building and issue clear justification for its conclusions.

A spokesperson for the zoning board said Tuesday that the board would schedule a new hearing and conduct a new vote.

"The hearing will be an opportunity for the applicant to provide additional information to the board," the spokesperson said in a statement.

The project on the site of a former dog park has been referred to as the "poop building" on Twitter because of previous plans by the registered community organization West Philly United Neighbors to seek fecal samples. In a letter to residents in March 2021, the organization asked for samples to "investigate if the development would adversely affect the neighbors' microbiota and increase the risk of developing colorectal cancer." The group later removed references to the study from its website.

The organization opposes plans for apartments for fear of gentrification and displacement of longtime residents. At a March 2021 meeting, three other registered community organizations in the area voted against the proposal, according to West Philly United Neighbors. All but five of the 69 neighbors who live within 250 feet of the site and attended the meeting voted against the plan, according to the group. Hundreds of people signed a petition against the project.

"Luckily, we have brave heroes in the community who chose to appeal the [zoning board's] decision in court," Ang Sun, president of West Philly United Neighbors, said in a statement Tuesday. With the help of a lawyer, "the community united, and the court and the judge made a very wise decision and reversed the ZBA's approval of the zoning variances yesterday."

In an agreement with a local registered community organization that supports the proposal, Cedar Park Neighbors, developer Meir Gelley agreed to reduce the apartment building's height and restrict rents in 15 of the apartments so they are affordable to households making 40% of area median income for 50 years. Those units would rent for $725 to $870 per month. The rest of the one- and two-bedroom apartments would rent for about $1,320 to $1,560 per month, including utilities, based on market studies conducted last year.

"We remain absolutely committed to developing this project, which we think is a great project," he said. "And it serves as a wonderful example of how a developer and applicant can work with neighbors and a community group on a project that promises to bring an unprecedented level of affordable housing to the neighborhood while being an attractive and compatible building with the neighborhood."

Gelley, who had planned to start construction by now, already has necessary building permits for the apartments.