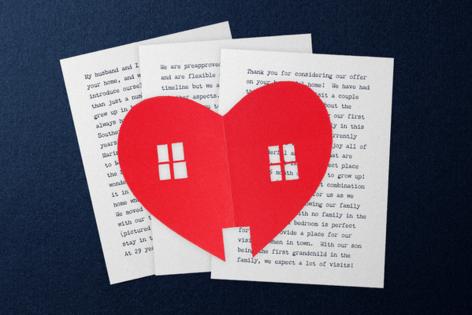 If you’re like most people, you wouldn’t think of writing a love letter to a person you’ve never met.

For years, prospective home buyers have been doing just that, professing their adoration to property owners they do not personally know and spilling all sorts of details to win their dream home.

It’s a practice that caught on in competitive housing markets, and in a place such as Los Angeles, where there is no shortage of creative writers, it became nearly engrained in the process of trying to buy a home.

Blatt, a writer, felt the weight of the pandemic in his small West Hollywood apartment and went searching for more outdoor space. The rent-controlled spot had been his home since he moved to L.A. in 1999. It was time for a change.

When he found the home he wanted, his agent told him he should write a letter to distinguish his application among the others.

Blatt professed his love for the house, envisioning his “octogenarian mother” eating breakfast on the patio during her visits. He described how he would use the space to make edits to his fantasy epic, born in that West Hollywood apartment, which surely would blossom between refreshing walks in the home’s garden.

He got the home. “I know there were multiple offers on the table,” Blatt said.

The letters used to be more common in higher-end sales, but the ferocity of the current market made them more of a regular thing at all price ranges, said Vanessa Perry, a nonresident fellow at the Urban Institute think tank, who has been studying the letters since members of the California Assn. of Realtors cited the discrimination concerns they raise.

“People feel like they have to go out of their way to convince sellers that they’re the right person to sell a home to,” Perry said. “Since the beginning of the pandemic, we’ve seen markets become hot in places that are unexpected.”