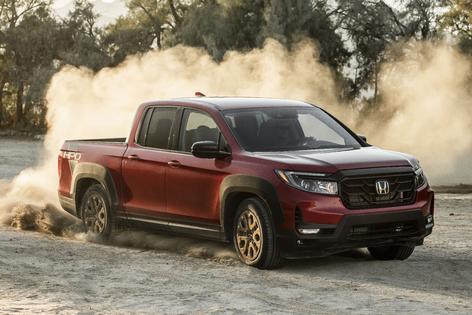 Honda was the first to sell a midsize truck that isn't one: the Ridgeline. And many people love that about it.

They love that has a bed, like a truck. And, unlike most "real" trucks, additional storage under the bed. That it can pull a 5,000-pound trailer, which most cars can't. And it can carry a four-by-eight sheet of plywood, flat, which no traditional midsize truck can.

But it has more in common with cars -- under its skin -- than it does with the traditionally designed midsize trucks it's an alternative to.

The Ridgeline looks like a midsize/crew cab pickup truck, but looks can be deceiving -- in a good way, if what you're looking for is something that can do many of the things a midsize truck can do, as well as things they can't.

Prices start at $38,800 for the base Sport trim, which comes standard with a Class III trailer hitch and wiring, a seven-speaker audio system and three-zone automatic climate control.

There are also RTL ($41,780), RTL-E ($44,730) and Black Edition ($46,230) trims, the latter coming standard with blacked-out exterior trim, black leather seats with red accents and all of the amenity upgrades that come in the RTL-E, including an upgraded audio system, heated steering wheel and wireless phone charging.

The Ridgeline carries over unchanged from 2022.

There are crossover SUVs in just about every size, but how about one that overlaps sizes? That's not too big -- but not too small, either?

Especially under the hood.

How do you decide which crossover to buy, given how similar most crossovers look? Well, you have to look under the skin.

If you do, you'll find some important differences.

The RAV4 is a compact-size crossover...Read More

It's an interesting fact that while small sedans have largely disappeared from the general market, you can still find a number of them in the luxury car market -- including subcompact models like Audi's ...Read More

Certain models define a brand. What would Chevrolet be without Corvette? Ford without the F150?

Acura once had a model like that -- the Integra.

And now it does again.