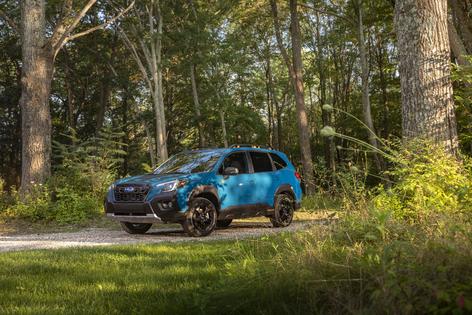 This new iteration of Subaru's popular crossover wagon has as much clearance as some 4WD SUVs and trucks -- which is why it can go some of the same places they can.

The Forester a compact-sized crossover -- of which there are many, including similar-sized models such as the Honda CR-V, Toyota RAV4, Mazda CX-5 and Nissan Rogue. It is the only crossover in the class that offers as much airspace (9.2 inches) between its underthings and the pavement -- which accounts for why it is more likely to keep moving when the others get stuck.

It is also the only small crossover with a standard boxer engine -- a type of engine that's also a flat engine. The layout lowers the Soobie's center of gravity. The weight of the engine being equally distributed on either side of its centerline also increases its stability.

This makes it some things the others aren't -- which helps it stand out from all those others.

Prices start at $25,395 for the base trim, which includes all-wheel drive. In many other crossovers, it's an extra cost.

The new Wilderness trim, which stickers for $33,020, also comes standard with 9.2 inches of ground clearance (8.7 inches in other trims) as well as five wheels - including a full-size spare with a full-size tire on it. This one also has a higher (3,000 lb.) tow rating, a more aggressive 4.11 (vs. 3.7:1) final drive ratio, StarTex water-resistant seat covers, raised roof rails, underbody skid plates and LED fog lights, among other upgrades.

It's easy to write about -- and decide whether to buy -- a vehicle that's in a class by itself, that doesn't have a half-dozen or even any direct competitors.

That model being a brand-new one from Hyundai: the 2022 Santa ...Read More

Small sedans are less "in" than they used to be -- which may be why Mazda offers its smallest sedan, the 3, another way.

You have your pick of sedan or five-door hatchback. Both are essentially the same 3 presented in two...Read More

Lexus understood the importance of value to people who bought luxury cars such as those made by Mercedes and BMW -- back when Mercedes and BMW pretty much owned the luxury car market. Lexus acquired a large chunk of what ...Read More

The best electric car is the one you never have to plug in -- a hybrid-electric car, such as the Toyota Prius. It has all of the advantages of an electric car, including the ability to be plugged in (if you buy the plug-in...Read More