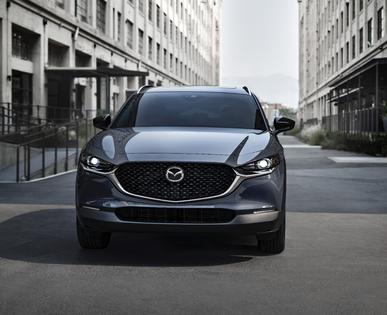 Sometimes, too close is not far enough.

The dimensional differences between the two proved to be so small that people had trouble telling the difference between them even though there were some other differences, such as the CX-30 having a much stronger standard engine than the CX-3.

In any event, Mazda has decided to make just one small crossover rather than two so it doesn't compete against itself for the same buyers.

The CX-30's general layout is similar to other small crossovers such as the Subaru Crosstrek, Toyota CH-R, Honda HR-V and Hyundai Kona, but the CX-30 differs from them by coming standard with an engine that's more powerful than the available engines in all of those models.

And now it's available with the strongest optional engine in the class.

Prices start at $22,050 for the base S trim, which comes equipped with a 186 horsepower, 2.5-liter four-cylinder engine (without a turbo) and front-wheel drive.

The Genesis G80, which is a big sedan, used to be available with a big V-8. It now comes standard with a small four. The same is true of its main rivals: the BMW 5 Series and ...Read More

Maybe Bigfoot is real. Something almost as unusual has just been sighted: A Cadillac sedan with a manual transmission.

Plus 472 horsepower. Through the rear wheels only.

If that can exist, then Bigfoot just might....Read More

Some of the highest-performing vehicles being offered lately are 4-by-4 trucks -- and Jeeps, including this V-8-powered Wrangler 392.

They are quicker than almost all high-performance cars and can do things no high-...Read More

Everyone wants to fit into the clothes they were able to wear when they were 20. Some try to put them on anyway. Usually, the fit isn't good.

It's the same kind of issue with putting three rows of seats in a compact-sized...Read More

Lots of medium-large crossovers offer a third row. Almost all of them offer very little room in that row. It's the dilemma of room vs. size.

The Mercedes GLS is among the few its size -- and length -- that has the room ...Read More