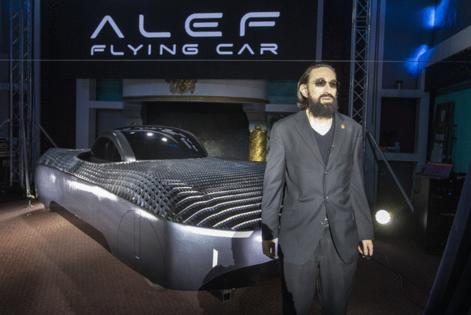 SAN JOSE, Calif. — When the lights lowered and thumping bass music filled a Silicon Valley event space this October, Jim Dukhovny was in his element. He is a former events promoter and musician dubbed “DjWizard” who is accustomed to hyping up rooms filled with revelers.

But he was not there to play techno, Dukhovny was there to sell the world on a product that so far is relegated to fantasy novels: flying cars.

“Almost all science fiction worlds have one thing in common. Almost every vision of the future came up with exactly the same thing – a flying car,” Dukhovny told a crowd of supporters and media. “Back to Future, Jetsons, Bladerunner, science-fiction is no longer fiction. The future is now.”

Along with three other founders, Dukhovny is behind Alef Aeronautics. By 2025 they say Alef will deliver the world’s first true flying car at a price tag of $300,000.

After unveiling the model flying car this month, Dukhovny sat with The Mercury News to talk about finding inspiration from his Ukrainian father, and the connections between DJ’ing, science fiction, and the future of flying cars. This conversation has been edited for length and clarity.

Q: How will your flying car work?

But we did not break the rules of physics, we fooled them. We turn the car into a biplane or circular wing plane by rotating the car and flipping on its side around the driver after takeoff. The whole car becomes a wing.

We also took out the engine and instead put four small engines inside each wheel. In the open space left by the motor, we put an electric propulsion system of eight motor controller propeller systems for flying. And we allow the air to come through by building a carbon fiber frame that sits on top of this allowing air to come through.

Q: How did you come to be a flying car CEO?