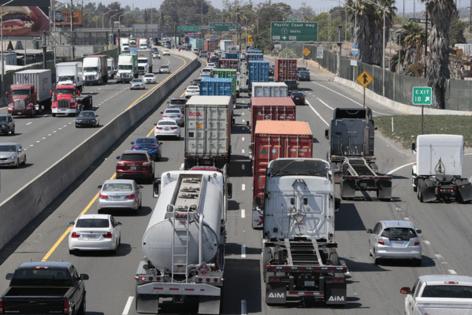 Saying they had a “moral obligation,” California regulators could soon ban the sale of diesel big rigs by 2040, ending a long reliance on the polluting vehicles that are the backbone of the American economy.

The proposal by staff of the California Air Resources Board would further require that, by 2035, medium- and heavy-duty trucks entering ports and railyards must be zero emission and that state and local government fleets be so by 2027.

The new regulations would likely demand a radical buildup of electric charging infrastructure, placing new stresses on California’s already fragile power grid and force the trucking industry to reshape how it does business. Regulators and activists say any disruption would ultimately be outweighed by lives and money saved.

“Pound for pound, heavy-duty trucks are putting out far more pollution than anything else on the road,” said Will Barrett, national senior director for clean air advocacy with the American Lung Association. “And that’s really directly contributing to the fact that California has the worst air pollution in the country.”

The proposal follows last month’s vote by the board to end the sale of new gas-powered passenger cars and light trucks by 2035, citing an urgent need to combat human-caused climate change. The combination of measures puts heavy pressure on manufacturers and policymakers to move more swiftly toward emission-free vehicles.

The California Air Resources Board, which must vote on the truck proposal, is expected to consider it Oct. 27.

Many who rely on the trucks for work or commerce are worried the state isn’t ready for such a quick transformation.

“There is no infrastructure to support this,” said Chris Shimoda, vice president of the California Trucking Association.

Even if California built up the charging infrastructure starting today, he said it’s unlikely that there would be enough to support the 400,000 big rigs traveling up and down the state by the deadline.

There are already 1,900 medium- and heavy-duty zero-emission vehicles operating in California, most of which are transit buses.

General Motors Co. is ending reservations on all trims of the GMC Hummer EV pickup and SUV Wednesday night after receiving 90,000, the company said.

Customers had to put down $100 to reserve one of the Hummers. GMC says ...Read More

WASHINGTON — The U.S. Environmental Protection Agency has approved Ultium Cells LLC to build an electric vehicle battery component at the request of a bipartisan group of Michigan lawmakers.

The joint venture between ...Read More

From a pandemic to an internal scandal on top of supply disruptions causing mass temporary layoffs, Lana Payne already has seen Canada's largest private sector union through a series of trials.

But the newly elected — ...Read More

Shares of Ford Motor Co.'s stock plummeted 12% Tuesday as investors reacted to the automaker's warning that the effects of inflationary pressures and supply constraints would show up in third-quarter earnings.

Hertz will offer GM EVs across all brands: Chevrolet,...Read More