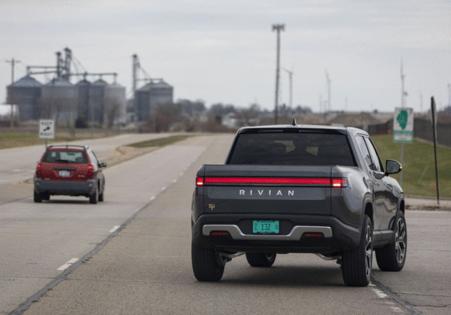 Rivian announced during a second quarter earnings call Thursday it had more than 98,000 orders for its R1T pickup and R1S SUV as of June 30. Amazon, an early investor in Rivian, has ordered 100,000 commercial electric delivery vans.

The California-based company, which launched production in Normal, Illinois, in September and has struggled with a slower than expected ramp-up, has built about 8,000 EVs and reaffirmed a scaled-back production target of 25,000 vehicles this year.

Rivian generated $364 million in revenues and reported a net loss of $1.7 billion for the quarter. The company reported Thursday it had $15 billion in cash at the end of the second quarter.

In addition to concerns about the production ramp-up, Rivian is navigating the implications of President Joe Biden’s historic climate bill, which passed the Senate on Sunday and is headed for a vote in the House on Friday. It includes an extension of the $7,500 federal tax credit for EV purchases, but sets a cap that would make trucks and SUVs priced over $80,000 ineligible. That would cut the majority of Rivian’s sales out of the mix for the tax credit beginning next year.

The $430 billion Inflation Reduction Act focuses on health care and clean energy, with a number of measures to promote EV adoption. The bill extends the $7,500 tax credit until 2032, adds a $4,000 tax credit for used EVs and lifts the 200,000 vehicle sales cap for manufacturers.

It also imposes new restrictions, excluding higher-income buyers and EVs priced above $55,000 for sedans and $80,000 for SUVs and trucks, which could impact Rivian and other manufacturers. The bill also includes new domestic battery sourcing requirements.

“We’re incredibly happy to see policy that helps drive more rapid adoption of electric vehicles, as well as important investments in building domestic battery cell production,” Rivian CEO and founder R.J. Scaringe said Thursday. “While many of our R1 configurations won’t meet the bill pricing requirements, our (next-generation) R2 product line and associated cell roadmaps are being developed to allow our customers to capture the value of these incentives. ”

On Wednesday, Rivian sent current customers who have reserved an EV a potential workaround to qualify for the full $7,500 tax credit before the bill becomes law Jan. 1. Rivian said buyers can sign a “written binding contract” for their R1T or R1S purchase, making $100 of their existing $1,000 deposit non-refundable, but excluding them from the price and income restrictions, regardless of the delivery date.