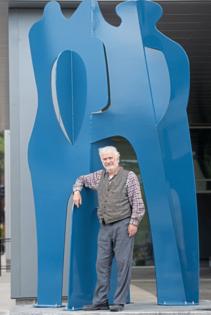 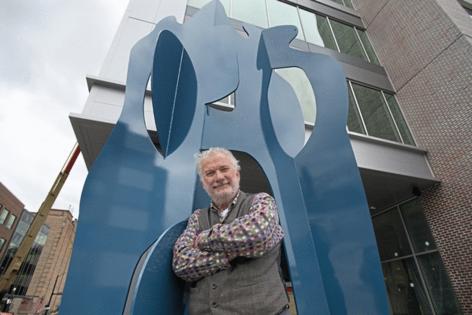 PITTSBURGH — Dan Droz’s brand of creativity elevates the everyday to the extraordinary.

He spent the 1970s professionally designing sculptural pepper mills and the next decade creating high-end furniture.

Beginning in 1979, he started a tradition of finding road signs whose words or numbers display the upcoming year, snapping a family photo and creating New Year’s greeting cards from them — a delightfully unusual tradition held so long, it was the subject of a 2016 Wall Street Journal story.

Later, he designed promotional materials for nonprofits and businesses, though even then, it wasn’t just paper. “He wanted to see how people would respond to them and interact with them,” his wife, Cathy, said.

And on his 69th birthday in August 2019, he left the formal working world, and put a spin on retirement that few others could.

For him, the joy of that phase of life isn’t the lack of work, but -- just as others might golf or garden — working at something in which the effort required actually elicits joy.

There are still 12-hour days, but the only “competitor” is himself as he bends metal, mesh or glass in his new career as a sculptor.

The New Year’s cards have bragging rights that exceed an appearance in the Wall Street Journal: They’re how Droz met his wife.

Cathy Cohen was a producer for “Mr. Rogers’ Neighborhood” when she met him at a holiday party in December 1980. She rebuffed his dinner invitations several times until she received her would-be suitor’s signature New Year’s card.

They married a year later and, in addition to Droz’s young daughter from a previous relationship, had three children together.

She watched her husband try to combine his array of talents over the years. His knowledge of manufacturing and fabrication from years of creating housewares and furniture, marketing and business know-how from private design work and all of the skills associated with artistry and design were joined fairly well during his 17 years on the faculty of Carnegie Mellon University’s Fine Arts and Business schools.

Owning his own design firm, which morphed into a marketing business, combined many of them, too.

But there’s one fascination he couldn’t use anywhere else: knot tying.

Droz is known to tie straws and straw wrappers into knots while he waits at restaurants. So do a lot of people. But in his case, it’s not a mindless fidget.

Always seeing potential in the ordinary, he observes the materials as he bends them, interested in the final form.

He found a place for that kind of quirky curiosity beginning at age 68.

He still owned his design/marketing business, though the effect of social media and more made the industry a fraction of what he once knew.

He believed he “might have 10 good years” left to create and wanted to use them on a new “adventure,” one that artistically explains a life lesson: Every point of view perceives something different.

Growing up in Brookline, near the City of Pittsburgh-Baldwin Township line, Droz and his brother would jump across the invisible border and make jokes about city life versus suburbia, existences which they found to be very different from one another.

In college, he worked children’s birthday parties as a professional magician, where his tricks’ “two realities” changed his thinking: “There’s one the audience sees and the one the magician understands.”

Having nearly seven decades of experience as a human being at the time, he understood that duality applies to the human condition as much as a magic show: “In everyday life, some the most important things about a person are intentionally concealed.”

Mixing his interest in perception versus reality, professional experience, a curiosity about materials and form (like his straw knots) and a drive to make the next 10 years his best, he thought about becoming a sculptor and, though a friend, approached the owner of now-closed Hertrich Gallery.

He asked Droz what anyone would: “Have you ever done any sculpture before?”

He had a book of photos to show the gallery owner, who offered him a show if he could produce 30 sculptures of similar caliber. Half of his pieces sold at his first show, in November 2018, which is almost unheard of.

In what was more of a recalibration than a retirement, he closed Droz Marketing on his 69th birthday and formally declared himself a sculptor.

All of Droz’s pieces experiment with multiple realities and, from any vantage point, hint at what might be concealed.

In one piece, the audience peers through a narrow opening, where a mirror is placed to reveal hidden interior components. Giant metal knots imply where strands curve even when obscured. And in a style similar to the Japanese art of cut and folded paper called kirigami, he plays with the space “between two and three dimensions” as a single sheet of aluminum is cut and then folded, creating multiple planes and conceptually meaningful pockets of negative space.

For his kirigami-like work, he saves aluminum cans at home or buys pieces of metal flashing, which can be cut with industrial scissors and folded by hand. After he hones a design, he’ll recreate it using software, which allows him to share the plans with his fabricator, Irwin’s Fedco, and his painter, North Irwin’s Electro-Kite Co., for pieces he wishes to powder coat for color or durability.

Most of his work hangs on a wall, is suspended from a ceiling or frame or sits on a pedestal. And most of it, like his pepper mills and furniture from decades ago, was created for private use.

But at 71 years old, he knows he has “a limited time to make a difference”. He saw his old pepper mills on eBay priced as collectibles, and thought about the value of creating things that “can’t be thrown away”, which is when he set his sights on the larger scale and wider audience associated with public art.

Just as sculpture gives meaning to all of the skills Droz has accumulated through his over-50-year career, his public art honors a lifetime of relationships.

For three months in 2022, positioned near the escalators at Pittsburgh International Airport’s Airside Terminal, was Droz’ sculpture, “Family Portrait”. The “figurative representation of a family posing for a picture” — perhaps a nod to decades of family photos adorning New Year’s cards — attracted 100 selfies, a handful of which allowed the artist to reconnect with acquaintances he hadn’t heard from in decades.

Just weeks ago, “Remembering Youth,” inspired by a “thought bubble” of formative memories, was installed in Bridgeville.

And on May 24, his largest sculpture to date, “The Gathering,” was unveiled in the Strip District, located near the entrance of the Three Rivers Heritage Trail and at one corner of the almost-completed 265,000 square foot mixed-use Burns Scalo project called Vision on Fifteenth.

The 12-feet-tall kirigami-inspired piece, powder coated in a muted cobalt blue, implies two figures high-fiving each other with openings in their forms, creating multiple planes to the structure which denotes connection and the hidden elements of each person.

To Pamela Austin, Burns Scalo brand ambassador, it was the perfect piece to to comment on the rekindling of workplace relationships, which were lost during the pandemic, and the social nature of the trailhead.

“We really wanted the theme of the artwork to be about coming together again,” she said. “So, we chose ‘The Gathering’ with figurative humans hunched together. It’s really more of a symbol.”

It’s a symbol to Droz, too, of spending his “retirement” working on the two things he knows will last: sculpture and time with his family.

“We think of an afterlife as going to heaven, but that’s not it. The afterlife is how people remember you,” he said. “If there’s nothing physical, then you are a memory, but that’s the thing about sculpture: It’s an expression of yourself that stays a pretty long time.”