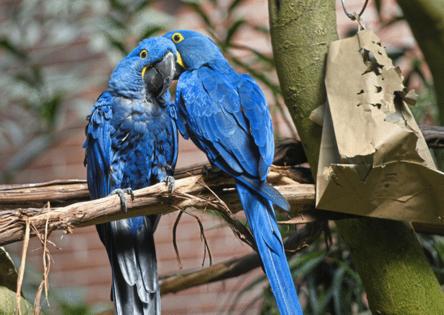 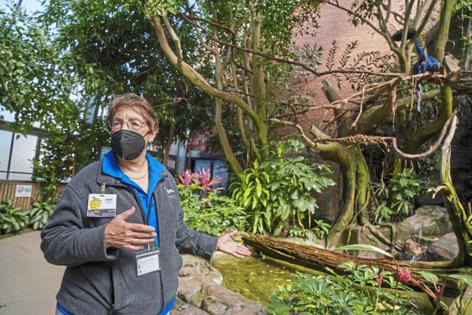 PITTSBURGH — As National Aviary volunteer Janet Robb accompanied a visitor into the Tropical Rainforest habitat, both women gasped out loud at a rare — almost-magical — sighting. Wookie the sloth was in plain view, hanging upside down on a low-hanging tree branch. His big eyes peered directly into the eyes of the visitor.

“It’s a National Geographic moment!” exclaimed Robb, a Port Vue, Pennsylvania resident who is the 2021 Volunteer of the Year at the bird zoo, located on Pittsburgh’s North Side.

It was a big moment because the sloth is seldom seen by visitors who ask staff and volunteers, “Where’s Wookie?” He is usually hiding, high up in the tops of trees where his brown fur blends in with bark and branches.

Although Robb has volunteered more than 10,000 hours at the aviary since November 2009, none of this ever gets old. Her genuine enjoyment of the 150 species of birds — and for the handful of mammals who co-habitate with them — is evident. She especially enjoys sharing her knowledge with visitors.

For 39 years, Robb taught public speaking at McKeesport Area High School. After she retired, she was looking for meaningful and interesting volunteer opportunities.

“I saw an ad in a magazine for retired teachers. It said the National Aviary was looking for volunteers. I knew nothing about birds and had never had a bird for a pet, but I applied,” she said. “I thought I would be handing out brochures or helping people find their way around.”

She was pleasantly surprised when the staff provided training that enabled her to teach classes and conduct “encounters” with the sloths, penguins and other animals.

She conducts “bat chats” about the flying foxes that are mammals native to Malaysia and Southeast Asia. Nutmeg, 16, Bouy, 16 and Maroon, 18, have 6-foot wing spans and cute furry faces that resemble Chihuahua dogs.

One of her unpaid “jobs” is preparing meals for aviary inhabitants, including cutting up fruit for the big bats.

“They especially love watermelons,” she said.

She handles birds in the aviary’s flight shows and even helps with the lights in the indoor theater.

Visitors pay extra to schedule close up “encounters” with the sloths and other animals. The $95 sloth encounters quickly sell out, “and people cry” with happiness when they get to meet Vivian and Valentino, Robb said.

As for Wookie, Robb and other volunteers and staff always know where he is hanging out, and they’re happy to point him out to visitors and provide some fun facts.

She knows the names of all the animals, pointing out Benito and Sapphira, the hyacinth macaws that live in the Rain Forest with Wookie.

When a loud “WOO WOO!” sound was heard, Robb chuckled and said, “That’s Gus, the Great Argus. You can hear him throughout the aviary.”

Sometimes there are new experiences and discoveries.

“There’s Bubba, a palm cockatoo. One morning before the aviary opened I heard him talking to himself, saying his own name over and over,” Robb said.

Of course, the gray bird declined to repeat that trick, sitting calm but mute as visitors watched.

In the big open habitats where birds can fly freely, many of them come very close to visitors, in the air and on the ground. They are accustomed to close proximity to people.

She also was Volunteer of the Year in 2010 and 2014. She started out volunteering about four hours per month, but that has evolved into six to 12 hours per week.

She wins the award because of her “strong leadership, excellence in visitor engagement and ongoing commitment,” according to the Aviary.

The mission of the 70-year-old aviary includes breeding and caring for many endangered species and raising awareness of helping birds in the wild and in zoos.

When starry-eyed wanderlusters dream of that trip of a lifetime, don’t be surprised if Oceania Cruises’ Regatta glides into their mental picture. The ship is elegant but comfortable, exquisitely styled but approachable...Read More