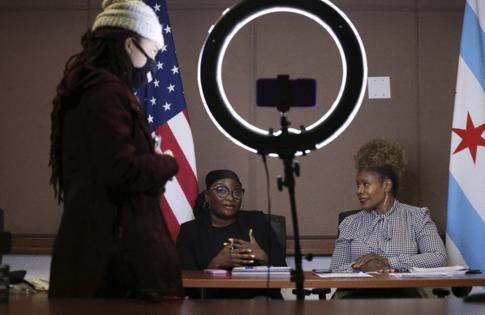 CHICAGO -- Some may know Dana Divine’s voice through gospel song, as a radio personality (on WGCI-FM or WVON Radio 1690), or her affinity for house music (she’s the organizer of the annual House Club Tour Pub Crawl). But if you tuned into the Chicago Department of Public Health’s Instagram page at 6 p.m. on April 21, you would have heard Divine speaking about her breast cancer journey live with Dr. Erica Taylor, an OB-GYN.

Divine was the premiere guest on Taylor’s new Instagram Live talk program, “Dr. Taylor’s Table,” a biweekly conversation between Taylor and leaders in the Black community centering on health disparities, wellness, mental health and other concerns. According to Taylor, the platform is part of Healthy Chicago 2025, the city’s five-year community health improvement plan that focuses on reducing the Black-white life expectancy gap.

“Those hard conversations are the ones that we need to have,” Taylor, one of CDPH’s medical directors, said. “The pandemic amplified a lot of things that we in the Black community have known about for decades on end. When I think back to medical school, we were having this same topic about what we’re calling health care disparities now — now it’s social determinants of health. It’s the same thing, just repackaged. I want to not just have conversations, but (talk about) how do we make these things actionable?”

Taylor, a former Mercy Hospital physician, recalls when she was seeing patients some had to choose between getting a prescription filled or using the money for transportation to an appointment, versus feeding their family.

“A lot of times we’re (the Black community) dealing with a lot of hard issues, so patients aren’t just dealing with health and chronic conditions, but also all these other social ills that we need to really level the playing ground in order for us to say that we’re going to have optimal health in the Black community,” Taylor said.

Divine said when she goes into dollar stores these days, she sees senior citizens buying canned goods for their nutrition (corn and peas) because they can’t afford medication and food. She said she reminds them to rinse the salt out of the can before they eat. When Taylor reached out to ask Divine to talk on the program, Divine said she didn’t pause when saying yes.

During her time at the “Table” Divine spoke about how the pandemic caused many women to put off annual cancer screenings and diagnostics. She also spoke about Equal Hope (formerly known as the Metropolitan Chicago Breast Cancer Task Force), a health equity nonprofit network of health care providers, community leaders and advocates whose efforts center on the reduction of breast cancer deaths and cervical cancer in the Black community.

“It’s a message that needs to be heard,” Divine said. “I don’t think it’s hopeless. But I think if we don’t do something and turn it around, it is bleak.”

Taylor said the program is a creative way in figuring out how the Black community can save itself, because “no one else is going to do it for us.”

The hourlong show takes place every other Thursday at 6 p.m. Past and current episodes will live on the Chicago Department of Public Health’s Instagram page. The guest on May 5 was Dr. Maya Green, a South Sider and chief medical officer at Howard Brown Health.

“I would love not just people who are heads of organizations, but also being able to tap into individuals from the community to be able to talk with someone from Englewood who is dealing with this issue of food apartheid,” Taylor said. “How do we really reach individuals at a grassroots level? I’m trying to create a table for Black individuals to feel comfortable talking about some of these issues that are facing our communities.”

She would like to see “Dr. Taylor’s Table” evolve into in-person “town hall” forums or pop-up mental health circles that exist on a grassroots level, where talks about wellness in marginalized communities are normalized — anything to eliminate systemic health care gaps that exist in the Black community. “Table” talk aims to provide a safe space for community to share their health concerns.

“I think making people feel comfortable about asking those questions … it’s OK ...,” Taylor said. “Looking at some of this racial equity work, I think also we have to hold our hospital partners accountable too. We have to be courageous about it. There’s a lot of work to be done, because there’s so much distrust of the medical system.”

Viewers of “Dr. Taylor’s Table” can send questions to Taylor prior to live tapings at DrTaylorsTableTalk@cityofchicago.org

FORT LAUDERDALE, Fla. -- Only a few months into the pandemic, Jenny Weathers, 58, stared at the mask covering her son’s mouth and came to a harsh realization.

“I couldn’t hear and I realized I was relying ...Read More

DENVER -- Coloradans who are interested in donating a kidney but concerned it would leave them unable to help if a family member got sick later have an option to get a “voucher” to shorten a loved one’s wait if they ...Read More