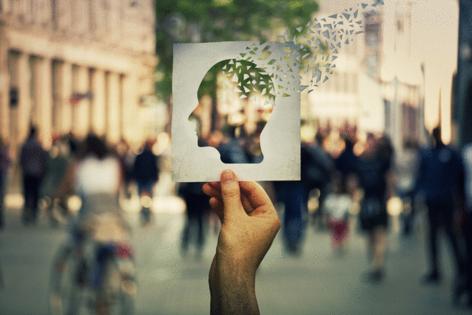 For people of a certain age, it takes only a few "senior moments" — struggling for words, names or memories — to cause worry.

Is this normal aging or mild cognitive impairment (MCI)? Is it all a run-up to Alzheimer's?

As a neuropsychologist at the University of Kansas Medical Center-Wichita, Ryan Schroeder conducts the lengthy cognitive tests — looking at memory, at problem solving, reasoning, language use and other measures — that help doctors tell the difference.

"If you were to meet with me, for example, for an evaluation," Schroeder said, "you'd spend probably about four hours of your life with me, talking to me, doing testing. After we're done, I'd sit down with you and go over the results. I'd determine: Is this normal aging? Is this mild cognitive impairment? Is this dementia?"

Schroeder said almost everyone becomes forgetful as they age.

"From a biological perspective, our brain is growing and developing up until age 25 or 30. Then our brains are aging," he said. "We see a very, very slow decline in many thinking abilities, including memory. We don't wake up one day and say I feel different. But you might wake up in your 60s and think, 'Man, my memory is not quite as sharp as it used to be,' just because it's such a gradual change. But it is a change."

Example: A person going to the grocery store at age 20, he said, would likely be able to remember a list of 10 items without writing them down. But at 60, it would probably require a list. That's normal.

And if one was later tested on those 10 words?

"Kind of a rough ballpark," Schroeder said, "if you're 65 and you're getting 10: Hey, that's fantastic. But seven or so is probably fairly realistic. Then, if after we're chatting, I said, 'Hey, by the way, now, tell me what those words were again.' If you originally remembered seven, you should probably be able pull up at least five or six of them 30 minutes later after being distracted.

"But if you're really struggling to pull those words up, that probably is going to be more than normal aging."

The older one gets, he said, the less likely one would be to remember. Both memory lapses and the risk of Alzheimer's increase with age. Age, in fact, is the leading risk factor for Alzheimer's. Given that, neurologist Suzanne Schindler, a researcher at the Knight Alzheimer's Disease Research Center at Washington University in St. Louis, offered advice.

"When people come into my clinic, typically it's been when there has been a change, or there's not a clear reason for why they're having difficulties. For example, we all lose our keys from time to time, or our cell phone. But if we've lost it several times in the past month, or we've missed appointments, or we keep repeating questions to people in a way that's different from the past, then that's when people start to get concerned."

If one is having occasional memory or thinking problems and it is not affecting their everyday life, she said, one might first visit a family physician for a shorter evaluation.

"If someone has memory and thinking problems," Schindler said, "and they're progressively getting worse, and they're starting to affect their ability to do things that they used to be able to do without difficulty — like they're having trouble using the computer, or their cell phone or maybe having difficulty driving, or they can't write checks without making errors, that's certainly a level where someone needs to get evaluated."

"I think what people care about is something changing," Swerdlow said. "Why is it changing? Is it going to get worse? And what can we do about it? And I would say that people should feel concerned if they're concerned.

"If someone is feeling that their cognition is changing to the point that they want to talk to their physician about it, they probably should. There's no harm in talking to their physician about it. Maybe they'll end up getting diagnosed with something, or maybe they'll end up being told, 'You know, we're not seeing anything. We're not seeing a problem, but we'll keep an eye on it.'"

In numerous cases, mild cognitive impairment is found to be caused by something completely aside from Alzheimer's, such as obstructive sleep apnea or memory-hurting medications, depression or other disorders like Parkinson's disease. Vascular problems such as undetected strokes can be a cause, as can a vitamin B-12 deficiency or mood disorders.

When those problems are treated, mild cognitive impairment can often go away.

"And there's a chance that it's something that is addressable, is treatable. If it's not, you can find ways, hopefully, to slow down the changes. But at least you'll know what's going on."

It is fitting that West Baden Springs Hotel, a magnificent domed resort built in 1902 in the manner of the grand spas of Europe, sits along an Indiana Historic Pathways route. The roads tell the story of Indiana and the ...Read More

People’s beliefs about aging have a profound impact on their health, influencing everything from their memory and sensory perceptions to how well they walk, how fully they recover from disabling illness, and how long ...Read More

People’s beliefs about aging have a profound impact on their health, influencing everything from their memory and sensory perceptions to how well they walk, how fully they recover from disabling illness, and how long ...Read More

The first of these is a day of somber reflection and of profound thanks to the hundreds of thousands of Americans who gave their lives so our country could be ...Read More