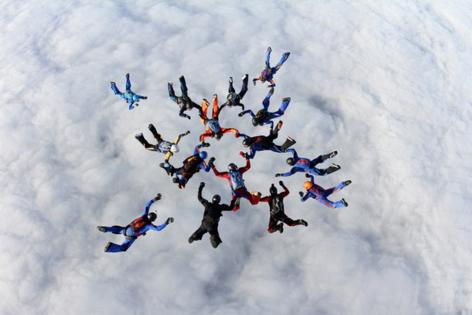 SAN DIEGO -- Imagine jumping from a plane at 1,800 feet and linking up with 100 people in a giant snowflake formation, then scooting away from traffic to open your parachute in time to land safely.

That is what 100 to 110 senior skydivers are planning to do in early April at Skydive Perris 20 miles north of Temecula, California, in the hope of setting a world record. Ejecting from five planes, they will exceed 120 mph and have 60 seconds to find their assigned link-up partners and grab arms and legs for a historic moment.

What makes this more remarkable and world-record worthy is that all these jumpers are in their 60s and 70s. The eldest are a man and a woman, both 78. The skydivers hope to break the record of 75 jumpers age 60 and older set in 2018 in Illinois.

Six of them are from San Diego County. They will gather at the Perris skydiving facility from across the world — as far away as Australia, Scandinavia and South America.

They represent diverse backgrounds and professions (from which most are retired): doctors, nurses, researchers, rocket scientists, venture capitalists, accountants, teachers, a roofer, a missionary and a mailman. The oldest, Betty Bennett, was an Olympic diver.

The parachuting veterans have a combined total of more than 35,000 jumps, with Bonitz leading with a whopping 14,280.

Coon, who will turn 60 April 2, is the youngest skydiver in this record-breaking attempt. Despite being the youngest, she has 7,536 jumps. She initially tried the sport in Wisconsin in 1989 when she was 27 and took to it like a bird to air, completing 50 skydives in her first 30 days. Like many of the other veteran skydivers, she already holds world-record bragging rights.

She participated in the largest formation ever recorded in 2006 in Thailand. In that event, 400 parachutists from 25 countries linked up. She also took part in sequential records (linking up in more than one formation during a single jump) logged by women skydivers.

The key to her success in April, she says is "staying focused and making sure I'm on my game and don't get distracted." After all, the group has only 60 seconds to successfully create their spider web-like formation.

She and Bonitz, a couple who live in San Marcos, met during recreational jumping. "We go skydiving almost every weekend if we're not doing something else — at least two weekends a month," she says.

"For me," she says, "it's a lifestyle. But anyone who is interested should try it once. It's so exhilarating. You can't compare it to anything else."

Despite the danger, Bonitz stresses that even a person skydiving their whole life has a much higher chance of dying from cancer. The biggest large formation challenge for him is to avoid collisions.

"It gets kind of crowded," he chuckles. If someone lands on top of you, it increases your fall speed." Your speed has to stay even with the others to successfully link up.

Six-time world record champion Dan Brodsky-Chenfield, who has managed Skydive Perris since 2003, is overseeing the record-breaking attempt. He loves organizing large group jumps and is familiar with the strengths and skill levels of these participants.

He helped organize a 300-person formation that established a world record in 2002, later surpassed by the 400-skydiver link-up in Thailand.

Brodsky-Chenfield was smitten after making his first jump as a college student in 1980. He was able to turn his passion into a profession through coaching, managing, organizing events and competing. He even wrote a book in 2011 about the sport, titled: "Above All Else."

Age 60-and-older parachutists have formed their own group, Skydivers Over Sixty, with the more widely used acronym, SOS. The U.S. group was founded in 1992 by skydiving legend Patrick Moorehead after he turned 60. It now claims more than 2,000 members from 27 countries.

To take part in a large group formation, the parachutists have to be calm, mentally sharp, able to make split decisions and physically capable of executing those decisions, explains Brodsky-Chenfield.

The participants are gathering in Perris on April 7-10 to finesse their formation. They rehearse on the ground, referred to as "dirt diving," then go airborne in small groups to practice logistics.

Every detail is meticulously planned from where the skydivers sit in each plane, how they exit, where and to whom they link up within the formation and how they push away from the group, Brodsky-Chenfield says.

"It takes a few jumps just to figure out how to do it," he adds. Since people of differing body sizes and weights don't fall at the same speed, the lighter skydivers will add weights and heavier ones will wear larger jumpsuits to slow their fall.

He expects it will take eight or nine tries to get the formation perfected. They have time to do as many as five practice runs a day. "We don't even try for the record on the first jump."

Eight people join at the center, and the lattice fans out from there until the final diameter is 150 feet. Upon completion, those in the center kick their legs to signal skydivers to break away. Sixty will leave the formation at 7,000 feet, 42 more at 5,500 feet and the final eight will separate and at 4,500 feet to open their chutes.

A licensed judge from the Fédération Aéronautique Internationale (FAI), also known as the World Air Sports Federation, is assigned to authenticate the success of the formation.

"If one person doesn't have the correct grip, it doesn't count," Brodsky-Chenfield says. "Everything has to be choreographed to a T. It should be impossible to actually do this."

DALLAS -- Twice a month, you can find Eric Kolb at the memory support center at the Villagio Senior Living facility in Carrollton, Texas. He sets up a TV and microphone while he greets residents gathering in the common ...Read More

PITTSBURGH — Dan Droz’s brand of creativity elevates the everyday to the extraordinary.

He spent the 1970s professionally designing sculptural pepper mills and the next decade creating high-end furniture.